As a Mac user, I make every effort to be annoyingly and irrationally biased against everything that Microsoft does, regardless of how good it actually is. Unfortunately for my techie cred, my perfect run of peevish, knee-jerk reactions to Microsoft products has come to an abrupt end with their new device for testing to see whether you’re actually a human (as opposed to one of them evil Internet-trawling spam robots). Most people have had the experience of signing up for an online community or another Internet service and coming up against what looks like an eye test from Hell, where you have to attempt to duplicate a series of barely recognizable letters and numbers.

Well, Microsoft’s alternative, Asirra, looks a lot less like a torture device for dyslexics and a lot more like a bonafide public service, given that the company has teamed up with Petfinder.com to allow Asirra users—who are asked to pick the cats out of a series of pictures of cats and dogs—to apply to adopt the homeless animals in the pictures. Anyway, I thought that was a pretty innovative way of combating the cat and dog overpopulation problem we’re facing, and I hope it catches on. Check it out: 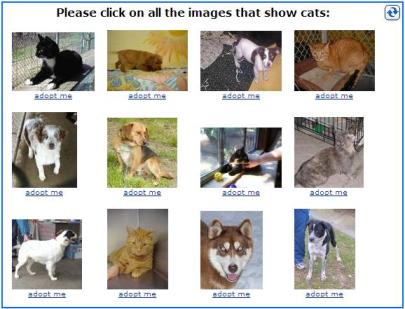