Here’s the thing. We’re a little ways away from getting shoe companies to ditch the leather entirely—though we’ve made some significant headway by encouraging retailers like The Gap to boycott the Indian leather industry, which really goes out of its way to be unpleasant to animals. That said, there’s something particularly hideous about Nike’s decision to celebrate the 25th Anniversary of their Air Force Ones by making a special edition shoe out of crocodiles. Come on, guys—couldn’t you have just cranked up the Nelly and thrown a kegger or something? Nike seriously needs to fire whoever it was in their marketing department who thought that brutally killing reptiles would be a cool way to celebrate their silver anniversary.

Anyway, the good news is that people are outraged about the promotion, and Nike’s been taking a lot of flak about it in the media, which has helped to raise awareness about the suffering of crocodiles used for clothing, who are often caught in the wild with huge hooks and reeled in when they become weakened from blood loss. It also gives me an excuse to post this amazing PSA featuring Gena Lee Nolin. Enjoy. 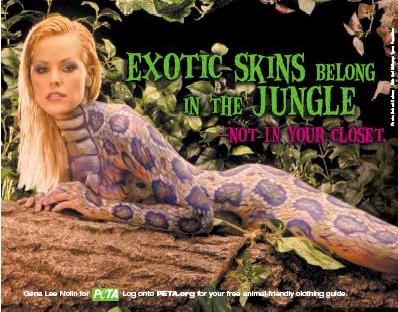