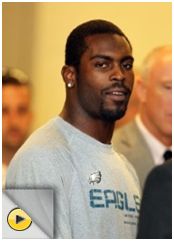 Michael Vick’s last-minute cancelation of his scheduled February 24 appearance on Oprah is all over the news, and the big question everyone’s asking is, “Why did Vick back out?”

PETA pal Simone Reyes tweeted her theory: “Rumor has it @Peta was prepping @oprah w/ the tough questions for Vick.” We can’t blame Vick for fearing the grilling he might have received from an avowed dog lover and PETA’s 2009 Person of the Year, but, so far, the only explanation Vick has given for canceling is that it was for “personal reasons.”

Hopefully, Vick will take the advice of Los Angeles Times blogger Joe Flint, who wrote yesterday, “Part of what Vick needs to learn and show is humility, and going on a popular TV show to say look at me now is not humble.” But in case Vick decides to try his luck with Piers Morgan (who lost a $300 bet with Oprah that he would be the first to snag Vick for an interview), PETA president Ingrid E. Newkirk has already sent Piers a friendly e-mail asking him not to book Vick on his show.