The Mentalist star Owain Yeoman investigated a “crime scene” outside Queen Elizabeth’s favorite store, Fortnum & Mason, yesterday. Despite months of pressure from PETA U.K., the British retailer has so far refused to stop selling foie gras, the production of which is so cruel that it is illegal under U.K. law. 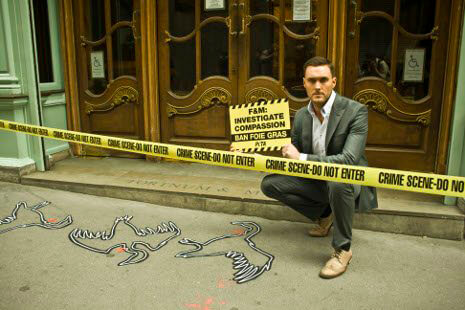 “In the UK, foie gras production is literally a criminal procedure – so why is a shop that prides itself on its British heritage still selling this cruel product?” asks Yeoman, an outspoken vegetarian and current Sexiest Vegetarian contender. “We’re encouraging all compassionate people to shop elsewhere until Fortnum & Mason stops selling foie gras.”

In foie gras production, young ducks and geese are confined to tiny cages or pens barely larger than their own bodies. Up to 4 pounds of grain and fat are pumped through pipes into the birds’ stomachs each day. Investigations on foie gras farms have documented sick, dead, and dying birds, some with holes in their necks from pipe injuries.

Other major U.K. retailers, including Selfridges and Harvey Nichols, have stopped selling foie gras, so what’s holding up Fortnum & Mason? You can help convince the retailer by sending an e-mail and asking that it stop being a royal pain to geese.