Eight years ago, we suspended our McCruelty campaign against McDonald’s (by placing an indefinite moratorium on the campaign) after the company agreed to adopt some basic animal welfare measures. Since that time, we’ve worked behind the scenes with McDonald’s to improve conditions for its animals … and we’re hatin’ what we’re seein’.

What’s got our (veggie) burgers broiling? Well, after having the better part of a decade to continue to improve conditions for animals, McDonald’s has virtually nothing to show for it—especially when it comes to chickens.

In particular, we’ve been urging McDonald’s for many years to require its U.S. chicken suppliers to switch to a less cruel slaughter method called “controlled-atmosphere killing” (CAK). McDonald’s even produced a report way back in 2005 agreeing with us that CAK offers significant animal welfare benefits over the current slaughter method (which results in broken bones and causes birds to have their throats cut while they are still conscious), but the company has yet to make any of its U.S. suppliers switch to this better method.

So, the McCruelty campaign is back. That’s right, we’re throwin’ down with the clown. And to help us kick things off right, rock goddess Chrissie Hynde joined us for a protest outside “The Rock ‘N’ Roll McDonald’s” (you can’t get more rock ‘n’ roll than Chrissie) in downtown Chicago, where we unveiled our new “I’m Hatin’ It” McCruelty logo, complete with a hijacked version of McDonald’s slogan. We also took the opportunity to do a little consciousness-raising by showing our new video, which reveals how chickens suffer at slaughterhouses that use the same slaughter methods as those used by McDonald’s U.S. suppliers. Check out the photos below: 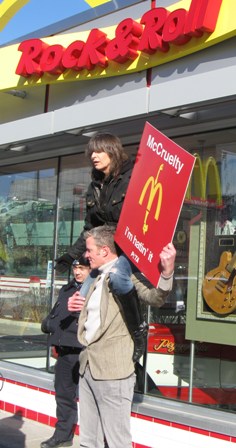 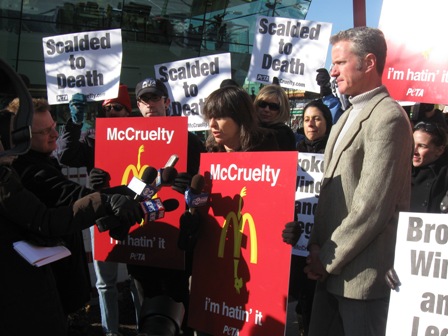