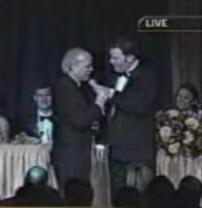 If you saw footage from the Radio and Television Correspondents’ Association dinner the other night, you’ll know that Karl Rove said some really freaky stuff when he was called up to do improv with the folks from Whose Line Is It Anyway. If you didn’t catch that, you can watch it here. The whole thing is totally surreal, but the part that caught my attention was when he responded to the question “What do you do for fun?” with this little gem:

I like to go home, get a drink, and tear the tops off of small animals.

Um, OK, Karl—and I thought I was frightened of you before. Seems like it caught my boss Ingrid Newkirk’s attention too, because she dashed off a little note to him about the whole business as soon as it happened, and sent him a more formal letter this morning. Here’s what she said in the first letter:

We saw your bizarre routine at last night’s Radio and TV Correspondents’ Dinner, and our first thought was, “Don’t give up your day job.” But on second thought, we do wish you’d give up your day job. Ever since you were beaten up by a little girl for your support of Richard Nixon, you’ve had a penchant for killing small living beings. You have a severe compassion deficit and, sadly, you have the president’s ear, and the last thing this country needs is someone whispering something violent into it. Very truly yours,
Ingrid E. Newkirk

There was a great piece about that letter today on MSNBC. You can read that here.

Now that Karl’s had a weekend to mull things over, hopefully he’ll be in a better frame of mind to appreciate Ingrid’s offer of an olive branch, which she sent him yesterday morning. Here’s that letter, which refers to a speech on non-violence that Ingrid gave in Bethlehem last year.

It has occurred to me that my own trip to the Middle East (Palestine) last Christmas day might be useful to you. I addressed the International Conference on Non-violent Resistance. My words and experience there are contained in this CD, which is being released later this week. In it I call on everyone who says they wish for peace to consider that how we treat animals is a reflection of our ability to truly open our minds and hearts to how we consider those who are even more recognizably “like us.” All great peacemakers have cared about animals, and I ask you to examine your own desire to hurt animals and kill them as a barrier to your ability to embrace peace.

And you can read about that one in this morning’s Politico. Anyway, there you go—a little bit of a carrot and stick approach for Mr. Rove. Let’s hope he responds to one or the other.