About a year ago, I was part of a big brainstorming meeting where we came up with all these ideas for ads that we could make to draw attention to the suffering of chickens in factory farms that wouldn’t be just, like, pictures of sad chickens. It was a great meeting, and we came up with a bunch of interesting stuff—ranging from funny to poignant to clever to (inevitably) just really weird. But after the meeting it sort of became clear that we’d just never have the time, money, or staff to turn all of the ideas we had into actual ads, market them, and get them out into the world. Which, you know, sad story and all, but the happy ending is that this year, the Young Guns Ad Agency held a competition for design students, advertising professionals, and artists around the world to make a compelling PETA ad about chickens. We’ve just announced the winners, and you can check out some of the other entries and vote for the “People’s Choice” Award here. Here’s one of the ads I liked: 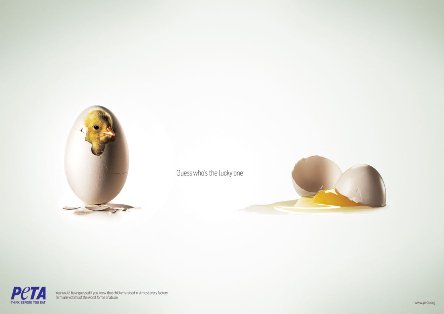