You may remember the real life story: As Hurricane Irene pummeled the East Coast, one Newport News, Virginia, man left 12 dogs and puppies alone in his yard to fend for themselves, some tied up with no way to escape the rising water. Newport News Animal Services and a PETA fieldworker drove through the rising water and increasing winds to rescue the dogs, and cruelty-to-animals charges were filed against the person who left them behind when he packed his bags and evacuated. 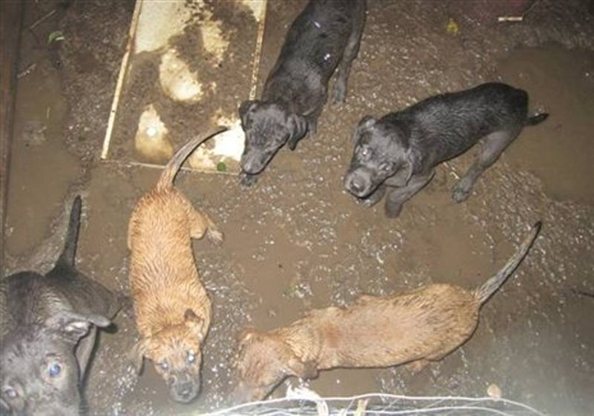 The case went to court last week. The dogs’ owner pleaded guilty to six counts of cruelty to animals and received a suspended sentence of 60 days in jail for each count, which he must serve if he has even one more run-in with the law in the next two years. He was also sentenced to 120 hours of community service and a $455 fine for the costs that animal control incurred in housing and caring for the seized dogs, and most importantly—the punishment that we always press for the hardest—he was prohibited from owning companion animals indefinitely!

The rescue was a blessing for one of the police officers who joined us on the call: He found his new best friend among the rescued pups and adopted him soon afterward.

If you ever see an animal in trouble, please contact the authorities immediately. If they are unresponsive, call PETA for help.