I hesitate to tell you about this poor cat’s ordeal, because the series of unfortunate events that I am about to describe is sure to give you a sense of foreboding, followed by twinges of angst, and perhaps a touch of melancholy. But I hope you will bear with me until the end of this sad tale, because you will be amply rewarded with cute cat pictures, a cool interactive button, and a denouement that will renew your faith—if not in humanity, then at least in the generous, forgiving nature of cats. 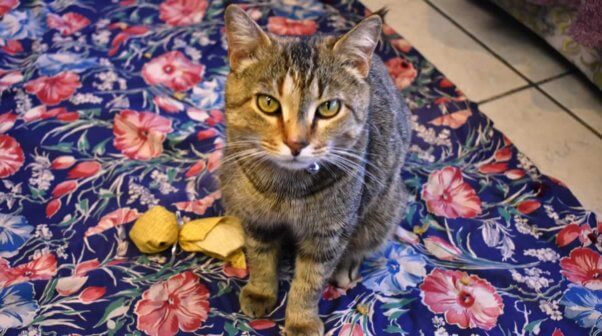 Violet was already in imminent danger by being forced to live outdoors, faced with the many hazards that come along with that—including deadly diseases, careening cars, and perilous predators. But her troubles began in earnest when her owner evacuated his dilapidated North Carolina home and moved across town to more commodious lodgings, leaving Violet and seven dogs behind. The man would come and feed the animals “when [he] could get a ride,” which meant that they likely went for days without food or fresh water.

As appalling as this sounds, it is not uncommon: PETA fieldworkers encounter animals living at abandoned houses with alarming frequency. Even in the face of such blatant neglect, it can be an uphill battle getting authorities to act, especially since the animals’ owners can be harder to track down than Count Olaf in one of his fiendishly clever disguises.

After spending her days outdoors and suffering a wound to her neck, Violet is now safe and sound — and ready to be adopted! https://t.co/WuzNgZULrZ pic.twitter.com/Fy12kNgHG6

PETA fieldworkers visited Violet and the dogs frequently over the course of two years, providing them with food, water, proper shelter, straw bedding, toys, treats, deworming medication, and other basic necessities. After much coaxing and cajoling, Violet’s owner finally allowed us to spay the 3-year-old cat because he was “tired of putting the kittens in a box and taking them downtown” to palm off on strangers like unwanted Baudelaire orphans. 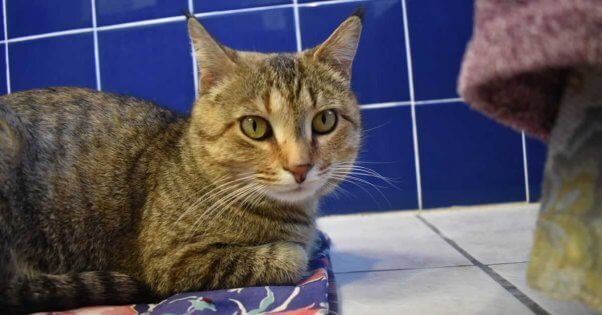 Violet was always thrilled by the fieldworkers’ visits, racing out to greet them and basking in the attention that they lavished on her. She cared more about getting tummy rubs than filling her tummy, despite the fact that her owner apparently didn’t feed her directly but only put out food for the dogs, forcing her to take her life in her paws every time she scavenged from their bowls. Miraculously, the dogs allowed the hungry little cat to share their food, even though they were starving and could’ve easily eliminated the feline interloper with a well-placed snap of their jaws. 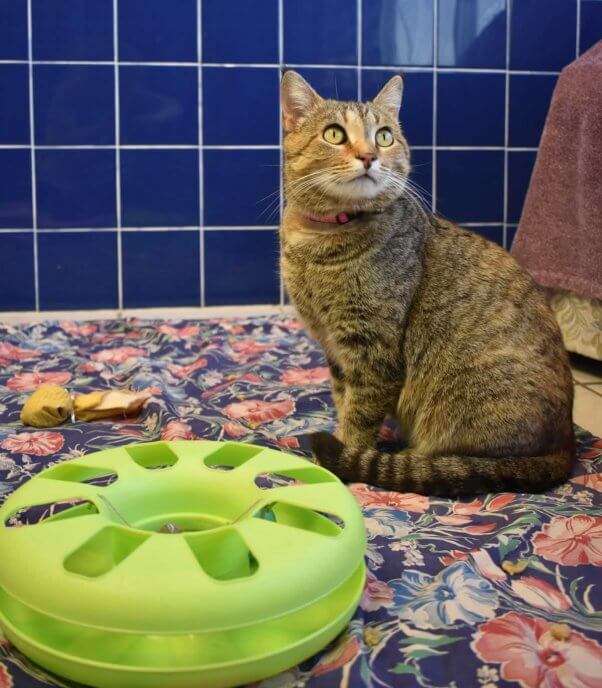 Eventually, the dogs were relocated, leaving Violet at the derelict property all alone. It was probably during this time that she sustained a wound on her neck, likely inflicted by some animal who didn’t have to worry about contending with Violet’s pack of hungry dog friends.

But after several weeks on her own, Violet’s series of unfortunate events took a fortunate turn, when her owner at last grew weary of traveling back and forth between his new home and the crumbling cottage and surrendered her to PETA.

Would you like to help ensure that Violet’s “bad beginning” has a happy ending? E-mail [email protected] to enquire about adopting this erstwhile orphan and making her as joyful as Sunny Baudelaire in a room full of unprotected ankles.