Update: Here’s a sweet quote from PETA campaigner Lindsay Rajt in the Amarillo Globe News: “We just thought Tex would be a huge help to us to expose the whores in the leather industry.” Apparently Lindsay needs to work on her enunciation a bit. She swears she said, “horrors”!

I’m not going to repeat the cliché that “everything’s bigger in Texas”—though I guess I just did—because, as a Texan, I know that some things are actually smaller in Texas. In the computer age alone, it was Texas-based companies that pioneered “small” technologies such as semiconductors and the portable PC.

Still, there’s no denying that Texans have a thing about big stuff. Heck, some folks here haven’t come to terms with the fact that a larger state (Alaska, natch) was admitted to the union—nearly 50 years ago. So think about how Lone Star residents would feel about a super-sized version of that most Texan of icons: the cowboy.

Now one such giant buckaroo might find himself homeless. “Tex Randall,” a 47-foot-tall, 7-ton cowboy sculpture in Canyon, Texas, faced eviction when the owner of the property he stands on decided not to keep him there. Another business owner purchased Tex, but doesn’t have enough money to move him.

So, despite our opposition to ranching, PETA is stepping in to see if we can find a permanent home. Why? ‘Cause what could be a better symbol than a big ol’ cowboy to help us make a huge statement about how cows are hurt by the leather “bidness”? All we have to do is add a little sign, like so: 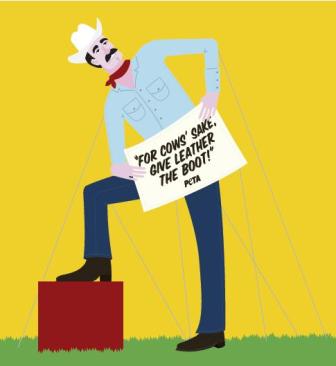