After PETA presented officials with evidence of a crass promotional stunt in which monkeys were forced to “deliver” clothing to celebrity influencers for the launch of a clothing company called Bananas Monkey, exhibitor Kevin Keith has once again been cited by the U.S. Department of Agriculture (USDA). He provided the monkeys—a baboon named Mickey and a capuchin named Chiquita—for exhibition to at least nine different private homes to be used as props for influencers’ social media posts. It’s a good thing that PETA kept the receipts—the USDA cited the reckless monkey exhibitor for not maintaining direct control of the animals at all times during physical contact with the public, potentially endangering the lives of everyone involved. 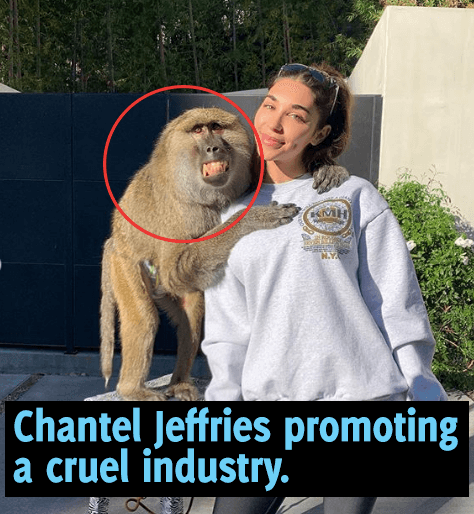 Specifically, officials referenced posts showing the animals in direct contact with members of the public as examples of federal Animal Welfare Act violations. Mickey was shown hugging and shaking hands with Swae Lee, Michael Yerger, Jeffree Star, and Daisy Keech, and Chiquita was shown sitting on the shoulders of Aisha Mian and Austin McBroom. The inspector stated that these stunts could have resulted in “physical harm to the people or animals involved.”

Keith is no stranger to citations from the USDA—he has repeatedly been cited for failing to maintain direct control of primates during public exhibitions, including in 2014 and 2016 when a baboon was tethered to a platform and made to have physical contact with the public. In 2017, officials noted that a baboon was tethered to a stool and a capuchin was tied to a leash during public contact (but neither animal was under Keith’s direct control).

Despite receiving multiple citations for exhibiting primates this way, Keith refused to change his methods, as evidenced by the posts from the Bananas Monkey publicity scheme that PETA called to the USDA’s attention. In response to Keith’s flagrant disregard for the law, the agency cited him once again for failing to comply with this regulation meant to protect animals and the public.

PETA also wrote to some of the influencers involved at the time of the apparent violations—including James Charles, Jeffree Star, The ACE Family (Austin McBroom), and Chantel Jefferies—and will be following up with each of them to let them know about the citation and ask that they commit to never again participating in or endorsing this exploitative and illegal activity.

Clothing brand Bananas Monkey carted two live monkeys—a baboon named Mickey and a capuchin named Chiquita—to the Los Angeles homes of influencers. Videos posted on social media show this bizarre and cruel promotion stunt. The only thing the twisted company promoted was speciesism: One of the monkeys was tethered to a barstool and grimaced as people shook his hand. Kevin Keith, the man behind these vile gimmicks, has a history of public endangerment. PETA submitted a complaint urging the U.S. Department of Agriculture to investigate the incidents, as they’re apparent violations of the federal Animal Welfare Act.

Exploiting defenseless monkeys in a beauty campaign is ugly. True beauty means treating others with respect and kindness—not putting someone on a leash and dragging them around a city for clout. Journalist Yashar Ali stated in a tweet, “Using primates like this is not only abusive, but also ends up encouraging private ownership of primates.”

Among the influencers who are helping to fuel this harmful trade are James Charles and Jeffree Star. Charles already showed poor judgment when he bought a dog instead of adopting one from an animal shelter. There are over 70 million homeless dogs and cats struggling to survive on the streets in the U.S. alone, but Charles chose to support a breeder, fueling the companion animal overpopulation crisis. Star shared photos and videos of the publicity stunt involving the two monkeys with his 14 million followers on Instagram.

Terror Is Not Entertaining

Fashion never needs to include the suffering of sentient beings. Bananas Monkey and these influencers are gaining shame, not fame, as they promote an industry full of abuse. The exotic-animal trade tears baby monkeys away from their mothers and trains them through fear.

“Anyone who cashes in on an industry that separates baby monkeys from their mothers and forces them to endure miserable lives, subjected to cameras and cages, is ugly inside and out.”

It’s industry standard for trainers to hit, chain, and yell at wild animals to get them to perform. Baboons like Mickey and capuchins like Chiquita should be living in African savannahs and South American rainforests, respectively, in large social groups with others of their species. Instead, Mickey the baboon has been forced to appear in commercials and TV productions. Keith, the supplier of both Chiquita and Mickey, has repeatedly been cited for failing to maintain direct control of primates during public exhibitions, including in 2014 and again in 2016 when a baboon was tethered to a platform and allowed to have direct physical contact with the public. 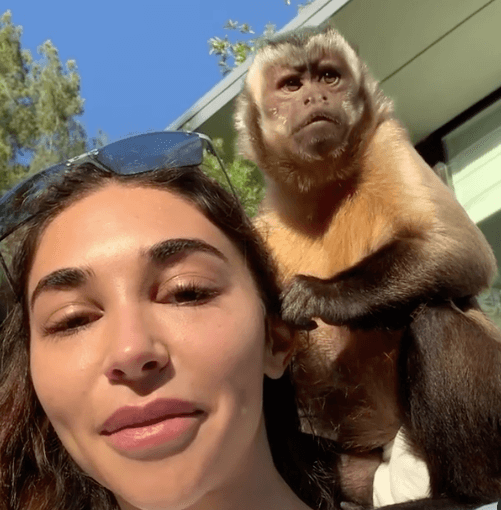 Animals are not props. No one should be exploited on social media for “likes.”

What Does It Mean When Monkeys Bare Their Teeth?

The “smile” shown by these monkeys is actually called a “fear grimace.” They’re trained to make this expression on command out of fear of punishment. 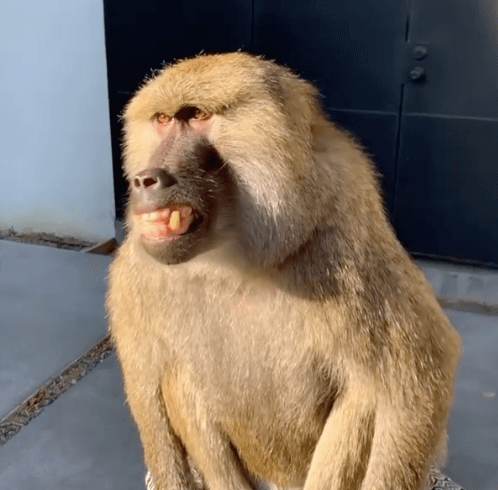 Primates Are Not Props—Here’s How You Can Help Them

In their natural habitats, baboons organize stable, long-term familial hierarchies within their social groups. Capuchins are quick learners who have been observed creating “tools” out of objects in their environment. For example, some populations of these monkeys routinely use stone hammers and stone anvils to crack palm nuts. Our fellow primates are highly complex animals—not props to exploit on social media for “likes.”

The Captive Primate Safety Act (HR 3135/S 1588) would prohibit dangerous direct contact with the public, among other important regulations that would help protect exploited monkeys such as Mickey and Chiquita. Take action for primates by urging Congress to pass it: