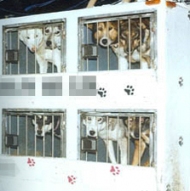 Every year, around this time, I start hearing about the vicious event you’re responsible for in which dogs are beaten and abused into running up to 125 miles a day without any rest. In the last two years, seven dogs have been killed by the Iditarod, through freezing, ulcers, or just plain exhaustion—and I’m certain that similar fates are in store for the animals whose suffering you’re arranging this year. Of course, these casualties are just the ones that are publicized—the dogs who are bludgeoned or drowned by mushers because they don’t measure up to Iditarod standards (or the ones who die alone in the tiny kennels they’re confined to for most of their lives) tend not to make it into the newspapers that report on your bloody proceedings.

I’m not surprised that, like so many people who profit from archaic and abusive customs, you defend yourselves by invoking “tradition,” but I can assure you that as more and more people learn that your tradition is one of cruelty, lies, and abject misery, it’s not one that’s going to be around for much longer.

If you’d like any more information about what PETA’s doing to ensure that these dogs’ misery doesn’t go undocumented, you can click here. We’re encouraging compassionate people everywhere to contact the sponsors of this event—Wells Fargo, Daimler-Chrysler, and Chevron—and let them know exactly what they’re supporting. I look forward to a time when your sadistic little race is a thing of the past.

To be honest, I don’t think the Iditarod Trail Committee is going to be swayed by my letter, since it seems pretty clear that they’re not exactly dog-lovers, but the companies that continue to sponsor this event need to know why they shouldn’t. You can contact Wells Fargo here, Daimler-Chrysler here, and Chevron here.