Just a month after HBO canceled Luck amid protests over the deaths of three horses, a whistleblower has released to PETA startling documents alleging abuse far beyond what anybody had guessed—and much worse than HBO or producers David Milch and Michael Mann ever admitted. See the full story in The Washington Post.

Among the information that the whistleblower released was this heartbreaking photograph, which allegedly shows the body of Marc’s Shadow, the 8-year-old arthritic thoroughbred whose leg fractured when he was being filmed in a racing sequence: 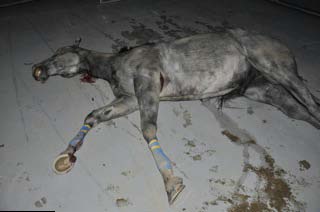 The documents, which are e-mails, notes, and complaints from the American Humane Association (AHA) representatives on the set, paint a picture of drugging, deception, and neglect. The following are among the allegations:

The situation was so dangerous for the horses on the Luck set, the documents allege, that AHA-hired humane officers urged AHA executives to recommend the dismissal of trainer Matt Chew. However, there’s no evidence that the AHA acted on its officers’ advice.

PETA has presented this new evidence of abuse to the Los Angeles District Attorney’s Office and renewed our request for an independent investigation. We will keep you updated.