UPDATE: Marc Halcon, the owner of Covert Canyon—which, for years, hosted deadly military trauma training drills on live pigs—is now facing foreclosure. The apparently trigger-happy Halcon owes $40,000 in delinquent property payments. His financial trouble is just one more sign that the use of pigs and goats in military trauma training is a dying practice. The Department of Defense should do some foreclosing of its own by immediately ending the use of animals in trauma training and, instead, giving troops access to superior, high-tech human-patient simulators.

San Diego County landowner Covert Canyon LLC announced at a hearing last week that it has stopped allowing its property to be used for cruel military trauma training exercises in which live pigs were shot, stabbed, and killed. Following the company’s announcement, the county barred any future trauma training on the property. 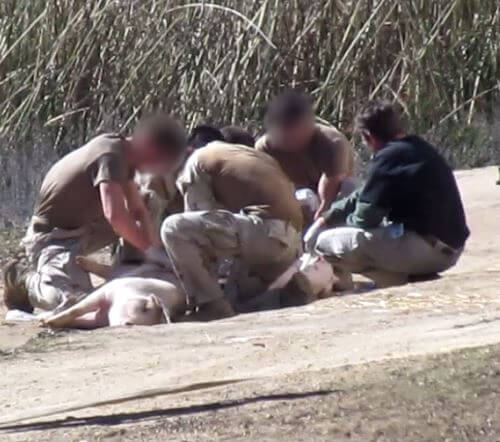 The company’s announcement—and the county’s ban—came after three years of PETA and neighbors of the property filing complaints and urging the San Diego County Planning Commission to prohibit Covert Canyon’s apparently illegal use of animals for trauma training, on the grounds that the property wasn’t zoned for it.

With your help, PETA has substantially reduced the number of live animals shot and killed in military trauma training and replaced them with advanced human patient simulators that better prepare soldiers to treat battlefield injuries. Please ask your congressional representatives to SUPPORT the Battlefield Excellence through Superior Training (BEST) Practices Act (S. 587/H.R. 1095), which will spare animals’ lives and ensure that servicemembers learn lifesaving medical skills using the most effective modern technology.