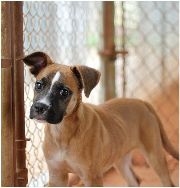 In response to our January 2010 lawsuit (and with a court date rapidly approaching), Davis County, Utah, has finally agreed to abide by the law and provide PETA with the intake forms and transfer records for the approximately 100 dogs and cats that it’s animal shelter callously sold to the University of Utah in 2009 to be tormented in experiments. While Davis County ended this shameful practice earlier this year, these records will show that the homeless dogs and cats who are unfortunate enough to end up cut up and killed in the university’s laboratories have names and personalities and are no different than the animals whom many of us consider family and with whom we share our homes. Indeed, some were peoples’ lost and surrendered animal companions.

Under the agreement, Davis County will be reimbursing PETA for 50 percent of PETA’s legal fees—nearly $18,000.

Since our subsequent undercover investigation at the University of Utah, the state legislature amended the law so that government-operated animal shelters are no longer required to sell dogs and cats to laboratories for use in cruel and deadly experiments upon request. Only one shelter in the state—Lindon’s North Utah Valley Animal Shelter (NUVAS)—continues to profit by betraying homeless animals and selling them to the university.

Please take a moment to urge NUVAS to stop stocking the university’s laboratories with helpless victims.