Earlier this week, the Twitter account for Reveille IX featured a few glamour shots of the beloved collie mascot at Texas A&M University (TAMU) lying on a bed of grass in front of the university stadium, soaking in the sun, and draped in a satin cape. While the photos of the “First Lady of Aggieland” are undeniably beautiful, we can’t help but notice the stark contrast between these shots of a happy, healthy collie and the heartbreaking photos of crippled golden retrievers at a TAMU dog laboratory, who are bred to develop a painful and debilitating canine form of muscular dystrophy.

Reveille IX was born at Overland Collies, a collie-breeding kennel near Cleveland. Before the dog’s breeders, Marcy and Mike Fine, “donated” her to TAMU, her name was Trix.

A golden retriever known as Jelly was bred to develop golden retriever muscular dystrophy (GRMD), a disease so debilitating that afflicted puppies become severely crippled and may endure agonizing deaths at a young age. Jelly was born on August 7, 2007, in a laboratory at the University of North Carolina (UNC)–Chapel Hill, before she was moved on June 6, 2012, to a laboratory at TAMU. Like Reveille IX, she had an alias. But instead of something lovable—like Trix—she was sometimes referred to as “9323,” an I.D. number assigned to her by laboratory staff.

Their stories will break your heart. @TAMU kept dogs Jelly & Peony to be used in muscular dystrophy experiments. https://t.co/HWG0atIIy6 pic.twitter.com/jTSGCZBxEY

Reveille IX is well fed and treated to snacks like cheese cubes and dog bones.

My friends @AggieNetwork gave me the best birthday present! Now I'm ready to #BTHOlsu with the best snack EVER! pic.twitter.com/ULKGSKMUlF

During her time in a laboratory at TAMU, Peony—a female golden retriever who was also bred to have GRMD—would refuse to eat, likely because of her worsening condition. Peony—or “6030,” as she was sometimes referred to—was already underweight, and her growth was stunted because of the GRMD, but her body condition worsened with an infection and repeated experimentation. Her enlarged tongue, caused by the GRMD, made her salivate uncontrollably. That, in turn, also made it difficult for her to swallow, breathe, and eat.

Looking at the Twitter account for Reveille IX, you can tell that she spends a lot of time outdoors. She attends TAMU athletic events, walks around campus, and visits the pumpkin patch on Halloween. She even takes trips around the country, visiting Aggies in other states.

Jelly did not play outdoors. She spent her whole life caged in barren laboratories. If laboratory staff had allowed her to go outside, she wouldn’t have been able to run and play like a normal puppy. Early on, her growth was likely stunted because of an inability to suckle properly. She also suffered from degeneration and wasting of her leg muscles, which, in turn, caused an abnormal stance that forced her to walk with a stilted, unnatural gait. Over time, her spine curved excessively inward. The only trip she ever took was when she was moved from the laboratory at UNC–Chapel Hill, where she was born, to TAMU—where she lived caged and alone. 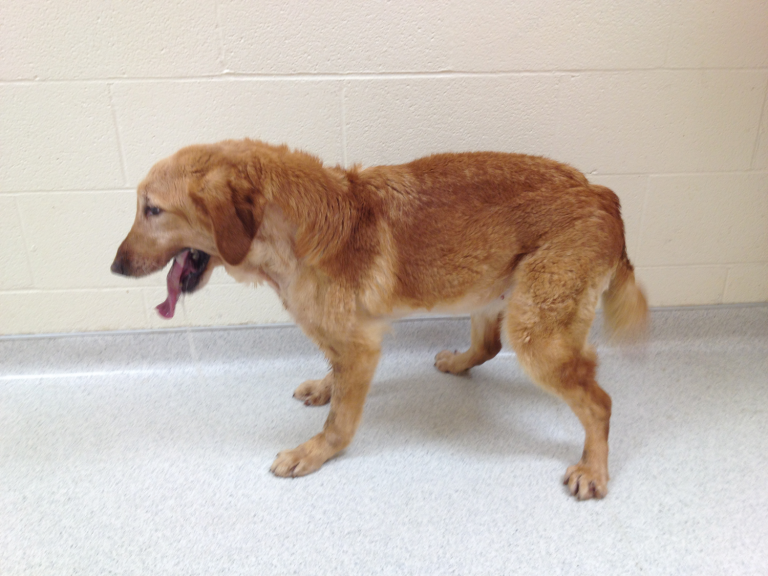 In her puppy photos, Reveille IX appears to be happy, healthy, and well cared for.

In photos of Peony between 1 and 2 years old, she looks sad, scared, and alone. You can see she’s emaciated. At 21 months old, she weighed just under 30 pounds—by contrast, the average weight for healthy female golden retrievers this age is 55 to 70 pounds. Photos of her as a puppy would be the only ones ever to exist. Golden retrievers are usually considered physically mature by age 2, and Peony was euthanized on March 5, 2013, two months shy of her second birthday. 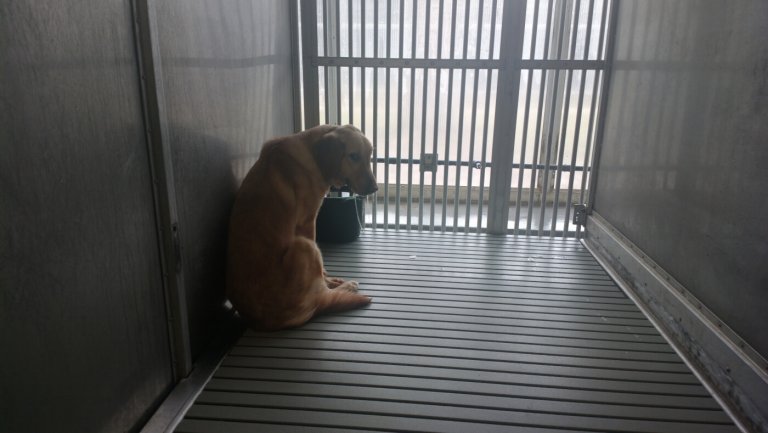 Although it’s impossible to ignore the differences between TAMU’s revered collie mascot and the golden retrievers who live and die at the school’s laboratory, these animals have one thing in common: They’re being used by the university. In their own words, Reveille IX’s original guardians “were happy to donate her to Texas A&M,” as if she were a piece of equipment or a cash donation.

TAMU’s Joe Kornegay has been experimenting on dogs for more than 30 years, and the school has been using live dogs as mascots since 1931. Animals are not ours to experiment on, nor are they ours to use for entertainment, and it’s past time that TAMU acknowledged this and took suitable action.

Please urge TAMU to close its dog laboratory, release all dogs for adoption into good homes, and redirect resources toward humane research methods.