We don’t know what started the feud between a man (we’ll call him “George”) and his neighbors. We only know that when George fled his home to escape the wrath of his neighbors for a few days, he left the mother cat he had taken in as a stray and her three 7-week-old kittens behind outdoors. 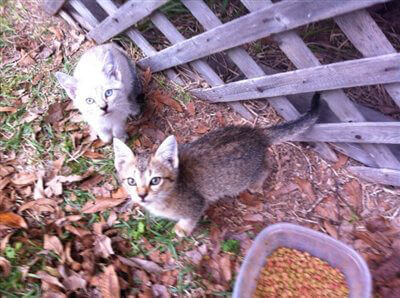 When he returned home the next day to gather some belongings and feed the cats, he discovered a gruesome scene. Two of the kittens were lying dead on the ground—their heads had been smashed in.

A distraught George called PETA for help, and knowing that every minute mattered, we quickly located an animal shelter that would accept the mother cat and her surviving kitten. As George was without a car, we found a local PETA member who was willing to collect the cats and take them to the animal shelter. Within hours, the mother cat, her kitten, and a third cat who was likely the father were safe. But there was not enough evidence to press charges for the kittens’ deaths.

While the mother and her surviving kitten were lucky to have escaped harm, they likely witnessed the horrific scene unfold. Even in friendly neighborhoods, the dangers of cruel passersby, cars, diseases, and other animals are too great to leave cats outdoors unsupervised. Let this be a lesson to us all.