Thanks to a few compassionate Kentucky residents, including the insuppressible Lindsay Rajt, who works on our KFC Campaign out of Louisville, David Novak, the CEO of KFC’s parent company, got more than he bargained for out of an evening at a local restaurant on Friday night. Lindsay and company were in the midst of a well-attended KFC protest that was drawing a lot of attention in downtown Louisville when a passerby shouted out that Novak was eating at Seviche restaurant just down the street. Lindsay and a fellow activist got into their vehicle (which, by a stroke of good fortune, happened to be a large black truck with a video screen set to play images of chickens suffering live scalding, debeaking, and other abuses) and circled the restaurant until the entire wait-staff came out to gawk. Despite a slightly unpleasant incident in which the chef thought a good way of handling the situation would be to spit in people’s faces, the protest was a big success. At the very least, it probably put David Novak off his dinner. 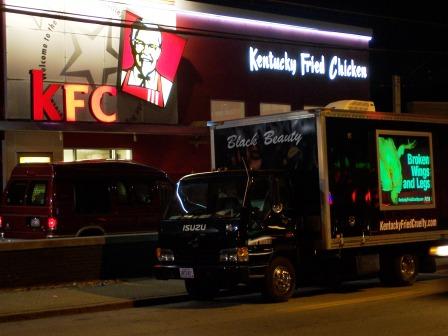