On Friday afternoon, a Fulton County Superior Court judge in Atlanta, Georgia, dismissed a complaint filed by Soul Circus, Inc., (aka “UniverSoul Circus”) against PETA for alerting the public to the neglect endured by Nosey, a solitary elephant owned by Hugo Liebel who was used by UniverSoul in some of its shows earlier this year.

As soon as we heard that the circus was planning to use Nosey in its shows, PETA informed UniverSoul CEO Cedric Walker about Liebel’s two-decade–long history of neglecting Nosey as well as about the nearly three dozen U.S. Department of Agriculture (USDA) charges that were pending against Liebel. Nosey has been chained on multiple occasions so tightly she could barely move and has repeatedly been denied veterinary care for her chronic skin condition. We implored Walker to leave her short act out of UniverSoul’s show, but he failed to respond.

PETA urged visitors to our website to contact UniverSoul Circus and the venues that were scheduled to host Nosey urging them to leave her out of the shows. Tens of thousands of you took action as a result.

If the Truth Hurts, Sue!

But rather than responding to this public outcry by doing the right thing and refusing to have anything to do with Liebel, UniverSoul sued PETA for publicizing Liebel’s appalling record of animal care! In a complaint that was rife with inaccuracies, misstatements, and falsehoods, UniverSoul even went so far as to allege that PETA made statements we never did. 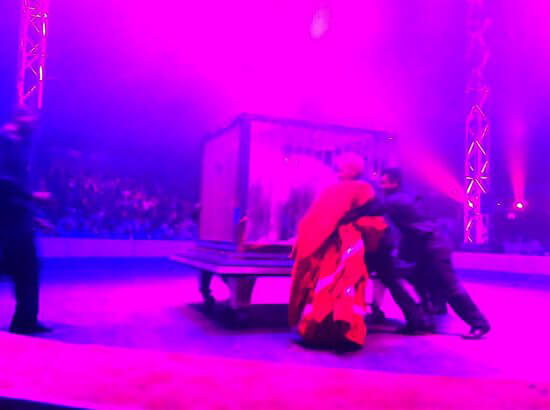 While UniverSoul has separately filed an amended complaint, it, too, is based on the same protected speech, and we are confident that it will be dismissed as well.

UniverSoul’s legal setback comes in the wake of the recent release of USDA records showing even more Animal Welfare Act (AWA) violations by another longtime UniverSoul exhibitor (and big-cat abuser), Mitchel Kalmanson, who was cited while traveling with UniverSoul for, among other abuses, failing to provide a tiger who was limping with veterinary care and housing tigers indefinitely in cramped travel cages.

Urge UniverSoul Circus to drop all animal acts from its shows. One of its top competitors, Cirque du Soleil, relies on willing human performers and is a huge success. Find out more about the AWA violations by the animal acts used by UniverSoul in PETA’s (newly updated!) factsheet.