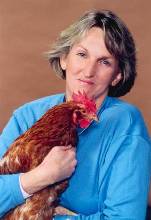 Well, as we promised last week, Ingrid has responded to 10 lucky commenters’ questions (see, it always pays to leave comments). Check out her responses below.

1. Question from Sasha: When will a movie about your life be made, and who will take your place in PETA when you retire?

In a way, the HBO special, I Am an Animal was about my life, but beyond that I do not know. As for “succession,” a few years ago, when my plane almost crashed, I had time to reflect on my legacy at PETA, and it was exciting to think about what good hands PETA is in. We each have our talents, and there are plenty of stunningly talented leaders at PETA and the PETA Foundation who each make a mark in their own areas, from marketing and youth outreach to IT and law, and from rounding up stars and making heartbreaking videos to going undercover—and, of course, raising and bringing in money so that we can hire more staff and help more animals. The multi-talented Tracy Reiman is my right-hand person, and I feel confident she would lead the team when I pop off.

2. Question from Aneliese: How supportive is your family on your views of animal rights and welfare? Do they agree with you on such matters?

I don’t have much of a family; my mother is the only one left, and she is wholly supportive. She has a “Proud PETA Member” bumper sticker on her car, puts copies of our “Vegetarian Starter Kit” in people’s hands, and makes sure animal rights books are on the library shelves. She also makes great vegan cakes! In fact, her recipe for almond tarts is in the PETA cookbook.

3. Question from Ben: Was there a particular life-changing experience or event that led to you become an animal rights activist?

I’ve told many of my personal stories in my books, such as Making Kind Choices and my latest book, One Can Make a Difference. I was a slow learner, and my late father and I basically ate our way through the animal kingdom before I met a pig who had been cruelly treated. That’s when I stopped eating all animals. As I say, I was a slow learner, so before that I had stopped eating lobsters (one wiggled his antennae at me when I chose him from a platter to be broiled alive) and snails (I let a bag of them go at the bottom of my garden rather than cook them). It wasn’t until I found a fox and a squirrel in steel traps that had been set for fun by some youngsters that I stopped wearing fur! Oddly enough, those were the very two types of animals whose furs had been used to make the first fur garments I owned: a suede coat with a collar made of silver-fox fur and an artsy coat made from the bodies of about 100 squirrels. I also inspected laboratories for the government, and what I saw inside them convinced me that animal experimentation is crude and cruel and can easily be replaced with sophisticated non-animal research.

4. Question from Mitch: What was the most exciting campaign or event—a specific demonstration, press conference, undercover investigation, arrest, etc.—that you have worked on with PETA?

It’s all exciting when you know that animals are being rescued and that people’s minds and hearts and eyes are being opened. And stopping car-crash tests on animals, getting men who beat pigs on factory farms convicted on cruelty charges, seeing an elephant who has spent her entire life in chains be retired to sanctuary—it’s all exciting. But if I have to pick one, I think the very first lab case, the Silver Spring monkeys case, in which PETA got the police to serve a search warrant—the first in U.S. history—to take those monkeys out of the hellhole in which they lived—that would be it.

5.Question from Brielle: If someone truly wants to make a difference for animals, how do they choose the cause that will have the most impact for animals and spreading awareness? What is the most crucial step now in the cause—promoting veganism? Saving animals? Fighting big KFC-like corporations?

I believe in personal activism and that every single thing we do makes a difference—the more we do, the more difference we make and the more quickly animal liberation from exploitation and torment will come. Because everyone eats, washes their hair, puts on clothes, finds amusement in life, and buys stuff, it is vital to start setting an example and encouraging others to follow. Eat a vegan diet and shun animal skins in all their forms—they are all stolen and/or animals have been killed for them. Cook for friends and give vegan cookbooks and cruelty-free toiletries as gifts. Leave copies of Animal Times in the doctor’s office and at the bus stop and put “Free Vegetarian Starter Kit” cards on every bulletin board. Hand people literature and engage in conversation to spread the word—and never, ever be silent in the face of abuse. When you speak up, others listen, and people who felt confident getting away with cruelty are shaken—perhaps not visibly, but shaken on the inside all the same. If you want to help with one particular campaign in addition to all this, then just jump in and do your best—it all counts.

6. Question from Sharon: What are your opinions on what happens to the “fighting dogs” who are rescued from dogfighting, and what is the proper way of evaluating a fighting dog to determine if rehabilitation would work for the animal?

With so many homeless dogs being killed for lack of homes, I would rather the time, effort, money, and work that goes into trying to rehabilitate a fighting dog be used to help the ones who don’t need such an evaluation. It just makes more sense. Also, if you find a home for a cocker spaniel or a Chihuahua or a mixed terrier, there is no likelihood that even if he or she goes nuts he or she will kill a child or a cat, but the same can’t be said for the ex-fighter who is likely too strong to control and can have a fighting mindset. It isn’t the dog’s fault, but we have choices. The most sensible choice is to put our money and time into sterilization programs as well as combating fighting and making fighting breeds unpopular so that people do not breed more of them.

7. Question from Kathleen: I wanted to know—how do you keep a positive attitude after all the horrible things you have seen while working at PETA?

I look back at how far we have come: SILK in the supermarkets, veggie burgers too. Faux “chicken” at most KFCs in Canada. Students able to say “no” to dissection. Medical schools having abandoned the use of animals in training. Pleather, faux fur, the great youth movement. Many circuses, such as Cirque du Soleil, getting out of the animal business. That means that our work pays off, so we must keep doing it!

8. Question from 4 The Animals: I read that you believe having “pets” is keeping them in captivity. Is this true?

I prefer the term “companion” to pet, as that is more respectful, don’t you think? Semantics can be important in how we view others. It drives me wild to see Britney Spears and Paris Hilton acquiring dogs as arm candy, which is why I wrote a book called Let’s Have a Dog Party! I wanted to draw attention to the fact that these dogs are individuals with needs and wants. They aren’t fashion accessories; cigarette smoke, loud music, and being left alone to stare at the apartment walls bothers them—it isn’t a real life. I ask that people stay clear of pet shops and breeders, who exacerbate the overpopulation crisis. But if a person has enough love, patience, understanding, time, and money for veterinary care, I would ask him or her to go to the animal shelter and get two dogs or cats—so that the animals can keep each other company when their guardians are at work or play.

9. Question from Dan: I will be turning 70 years of age in a few years and my wife is in her 50s. We are guardians of two dogs—one of whom is a puppy. My wife and I have no immediate family. I don’t mean to sound maudlin, but if anything were to happen to my wife and me, I would like to set aside some money in our will for the lifelong care of our dogs. Do you know of any organizations that have been “approved” by PETA that would be able to take in our dogs and treat them in a loving manner in the event of our demise? We reside in the southern California area (but we would be willing to send them anywhere if the organization is “top notch”).

Please be very careful and always visit the place you might leave your animals to. You have to be very sure that they are right for your dogs. I have seen many “sanctuaries” where animals are miserable. Caged for life and patronized, they have lost the spark of joy that animals should have. Many of these places are warehouses, really—you can’t call them much more. If you get stuck, please write to the PETA Foundation’s Tim Enstice, and we’ll see what we can do to help you find the right place.

10. Question from Liz: If you could make a magic wish to banish something immediately and forevermore, what would it be? The fur trade? Vivisection? Factory farming? What kind of abuse has the most pressing urgency above all others?

If I had a magic wish, it would be that human beings would put themselves in the place of all “others,” and then they’d really live by the Golden Rule, “Do unto others as you would have them do unto you.” In other words, I would wish for empathy. And studies show that some people have a very poorly developed part of their brain—the mirror neuron. This means that they can’t extend much beyond their own selfish interests. But, if I could influence only one area of animal abuse, that’s a very hard call. It might be “pest control,” as billions upon billions of mostly little animals—raccoons, beavers, mice, birds, insects, etc.—are poisoned with gut-wrenching chemicals or drowned in underwater snares, or their backs are broken in traps, or their faces get stuck in glue boards—and so on.

Thank you, Ingrid, for giving us a better insight into your life and the animal rights movement. To read more about Ingrid, check out her personal blog at IngridNewkirk.com.