A few photos and a short bio aren’t enough to snag a potential love interest, so instead of being flashy and clever with minimal characters, try a little compassion in your diet for more matches!

For one week, PETA ran an experiment comparing who could get more interest from women, a meat-eater or a vegan. The profiles that PETA used were nearly identical, with one exception: One featured a self-proclaimed bacon lover with photos highlighting his love for dead pig flesh, while the other proclaimed, “Vegan for life,” and featured photos illustrating his kindhearted choice. 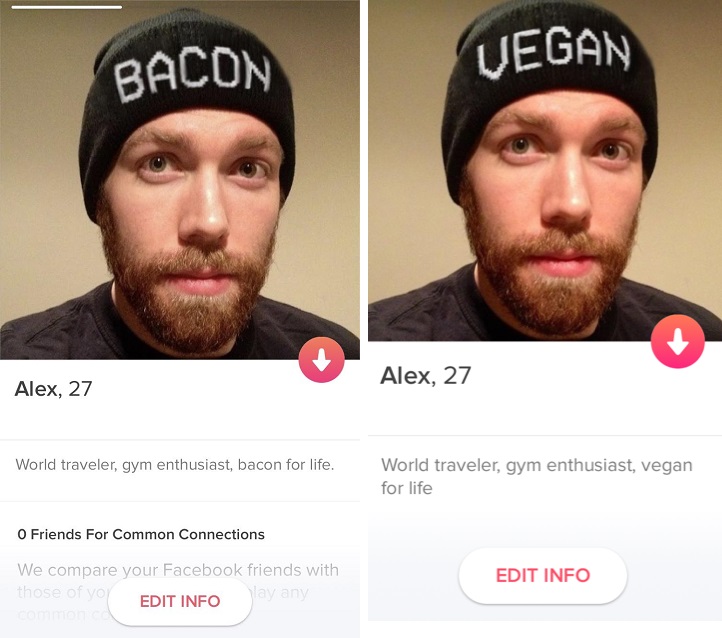 We ran our study in Pittsburgh, Dallas, and Los Angeles. Overall, the vegan profile got 50 percent more “right swipes” than the meat-eater profile.

Women looking for men on Tinder can’t seem to resist tapping on the heart when a guy clearly has a real one.

This isn’t the first time that vegans have done better than meat-eaters on the spicy dating app. PETA Australia conducted a similar study and found that its vegan profile got double the number of matches when compared to its flesh-eating counterpart. In a PETA U.K. version, the vegan profile won again, with nearly double the right swipes of the other option.

In addition to the chance to meet a kind person, picking a vegan on Tinder comes with an additional bonus if you’re looking for someone whose “performance” is top-notch: Yep, it’s been shown that vegans make better lovers.

Going vegan is healthy, humane, and hot. You’ll reduce animals’ suffering, eat in a sustainable way, and improve your health (and maybe even your sex life). It’s nice to snuggle up with someone who’s passionate and compassionate. Prove that you’re both by going vegan today: