Kindergartners and baby animals: two super-adorable groups that, when combined, could easily cause the internet to implode. So at first glance, all appears to be right in this viral video of students expressing their wonder and then singing “Happy Birthday” to a newly hatched chick.

But the reality is that there’s nothing cute, fun, or adorable about it. Those hatchlings will probably be dead soon, or they’ll wish that they were.

This chick—like so many other babies hatched in classrooms—will never feel the love and warmth of a mother.

Just like humans, chickens love their families, have complex social bonds, and value their lives, but when they’re used as classroom teaching tools, they’re denied everything that’s natural and important to them. 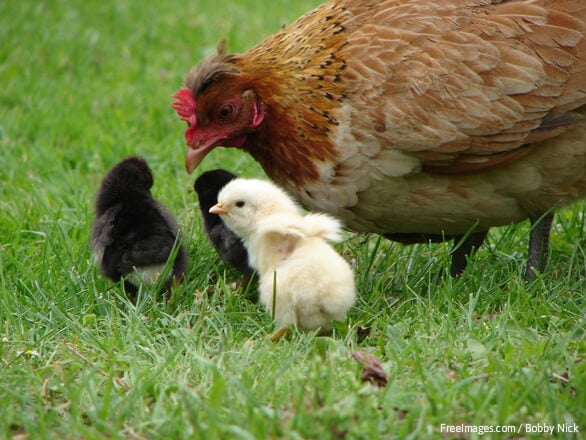 Even before they hatch, chicks need their mothers, who carefully rotate their eggs during gestation. Those grown in an incubator can become sick and deformed, and their organs can even stick to the sides of the shell as a result of not being rotated properly.

Imagine what it would be like if a bunch of 6-year-olds were your caretakers.

These babies are living, breathing, thinking individuals who should be with their mothers—not handled by noisy mobs of children. Chickens are quite the talkers, too, vocalizing more than 30 different sounds to communicate. Mother hens begin teaching these calls to their chicks before they even hatch. What kindergartner can socialize a chick like that? Also, consider that if the eggs hatch on weekends, the chicks are left on their own until Monday morning.

People who have spent time with chickens know that, just like dogs, cats, and humans, each bird has a unique personality that often relates to his or her place in the pecking order. Some are outgoing and fearless, while others are shy and watchful. Some enjoy human company, while others are standoffish or even a bit aggressive. In chick-hatching projects, the birds are treated as nothing more than tools in classroom experiments, which teaches students to ignore animals’ right to autonomy.

You might have “hatched chicks” in school, but why is it a bad idea? 🐣 https://t.co/wbwkYDMgSD

And here’s the kicker: The baby birds are typically killed after the project is over!

Ever wonder where these chicks go after their stint in kindergarten jail? Many schools don’t consider the fate of the birds, because most suppliers say that they’ll take them back after the experiment. But commercial breeding operations can’t risk bringing pathogens onto their farms, so the chicks are likely killed once the project is done. How’s that for teaching children about the circle of life?

Save chicks from this nightmare.