This is the story of a princess whose life was anything but a fairy tale:

Princess, a macaque, wasn’t born in a castle. She was born in a laboratory at the New England Primate Research Center in 2004. In 2014, at 10 years old, she was shipped off to the Wisconsin National Primate Research Center (WNPRC). But she didn’t get her name from staff at the WNPRC, where, in her anguish, she pulled out her own hair, leaving her body nearly bald for at least six years. In the laboratory where she was held, she was referred to only as a number—rh2519—and treated that way, too.

Princess received her fitting name—and likely the first demonstration of kindness she had ever experienced—from a knight in shining armor: a PETA investigator who went undercover at the WNPRC. The investigator named her Princess to reflect her sweet-natured personality and gentle way of accepting treats.

A Damsel in Distress: Poor Princess Lived Locked Away in a Dungeon

In nature, macaques are gregarious animals with large social circles, but Princess never got the chance to make friends with other members of her species. She also never got to climb trees or forage for food—instinctual behavior vital to her health.

Instead, experimenters (more like mad scientists) isolated her. They held her in cold, wire-bottomed cages and repeatedly forced her to have babies who would later be ripped away from her. Princess gave birth four times at the New England Primate Research Center and four more times at the WNPRC, where workers typically separate babies from their mothers when they’re only about a year old.

When their beloved babies are snatched away, it’s extremely traumatic for mother macaques like Princess. Macaque moms are deeply devoted to their young and typically nurture them by gazing lovingly into their eyes, kissing them, and using special vocalizations to speak to them (aka “baby talk”). One of Princess’ infants, who was born in 2017, lived for only one day. When a mother monkey’s infant dies, her grief can be so devastating that she may carry the limp body around for days.

Free in her natural habitat, Princess would have spent years with her offspring. Her daughters would have stayed with her for their entire lives. But experimenters took all her babies from her so that they could torment them in tests.

monkeys but because
should she's imprisoned
look like in a @wnprc
this: lab, she
looks like this: pic.twitter.com/gJhVSx2osO

In addition to having diarrhea on multiple occasions, Princess tore out her own hair and the hair of one of her infants. According to records obtained by PETA from the University of Wisconsin–Madison, where the WNPRC is located, Princess sustained hair loss over 75% to 100% of her body in September 2020.

In an attempt to stop her self-mutilation, workers at the WNPRC gave her wooden logs and coconuts to pick at. But a log wasn’t enough to take away the deprivation and misery of a life sentence in a cage.

The documents that PETA secured also reveal that Princess was once left bloodied and bruised after WNPRC workers confined her with an incompatible macaque who attacked her. She sustained multiple, persistent injuries, including a bloody wound on her thigh, multiple scratches on her head and face, large lacerations at the base and tip of her tail, cuts on her hand, bruises on her neck, and large scabs on her back.

She wasn’t the only one who got hurt.

PETA’s investigation revealed a consistent pattern of injuries caused by animals to one another and to themselves at the WNPRC, likely as a result of the severely stressful conditions in the laboratory. Workers there confined monkeys to barren metal cages every day and night, sometimes alone or with an incompatible cagemate—both of which have caused these highly social, intelligent animals frustration and psychological distress. Investigators found one monkey who had lost part of an ear in a fight with her cagemate. Another imprisoned monkey had picked compulsively at a wound on his leg, mutilating it down to the muscle.

In 2022, PETA Learned That Princess Had Been Killed the Year Prior at 17 Years Old

There was no fairy-tale ending for this princess. In November 2021, she was impregnated, yet again, and then infected with Zika virus. In early December of that year, she was killed and her fetus was removed from her body for analysis. No one at the WNPRC mourned her loss.

Unfortunately, Princess’ story of suffering isn’t the first—or last—of its kind. Like all mothers, she wanted to comfort and care for her babies—and she deserved a life in which experimenters didn’t deprive her of her most important relationships. 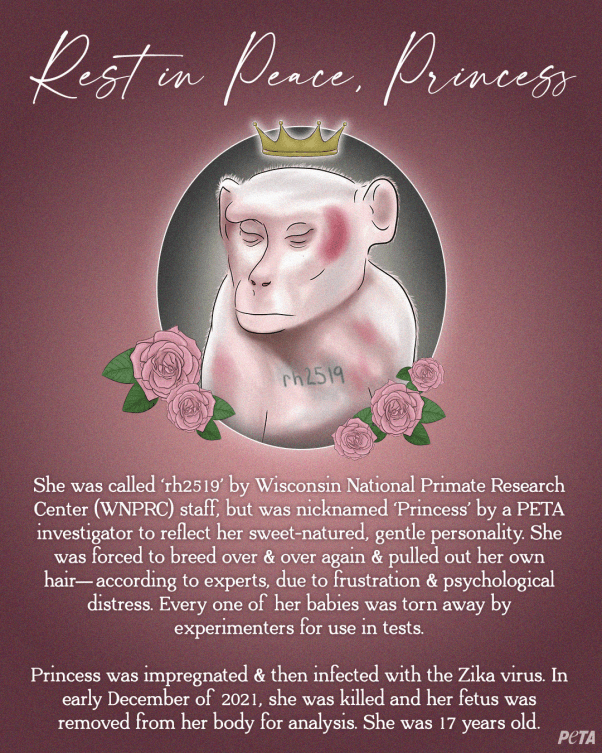 Please take action below in Princess’ memory. Don’t let her death be in vain. You can still help prevent other monkeys from suffering at the WNPRC.