You may have noticed that today in the Los Angeles Times, The New York Times, and The Wall Street Journal, there was a chimpanzee whose wrists are bound by handcuffs made out of a strip of film. The stunt was for a PETA ad, and the chimpanzee was created using computer-generated imagery (CGI), as all animals used in TV and film should be. 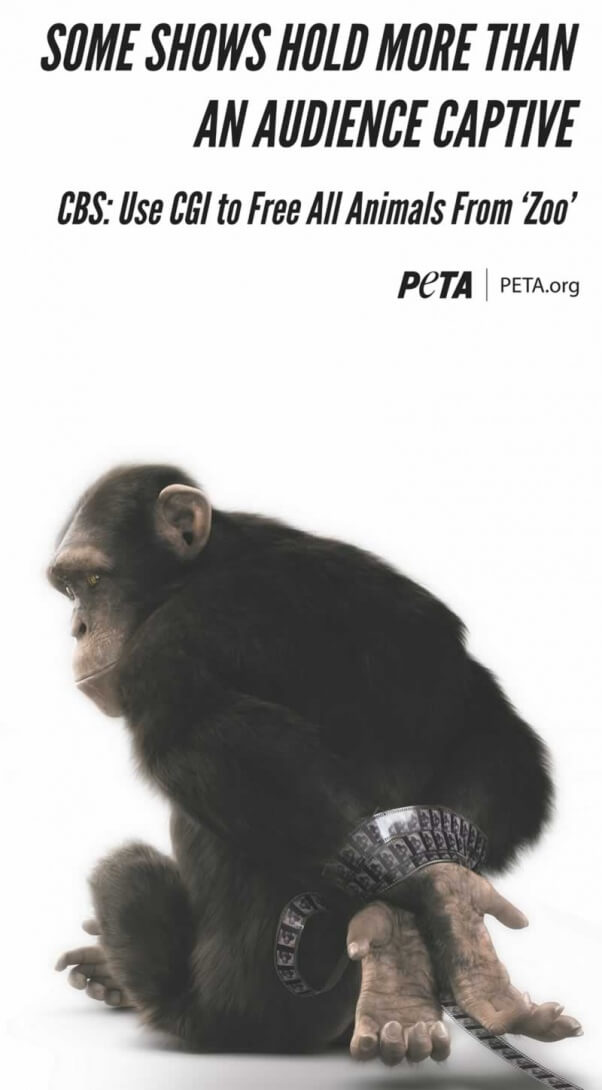 In a few days, CBS will premiere the second season of its series Zoo, and the show will use big cats even though executives met with PETA and learned that wild animals used in TV and film production are torn away from their mothers, often beaten during training, and locked in tiny cages. Zoo is also reportedly planning to use wolves, reindeer, horses, and buffalo.

“If Darren Aronofsky’s Noah and Jon Favreau’s The Jungle Book can create entire realistic animal kingdoms with CGI, then CBS can clearly make its show without exploiting any live animals,” says PETA Senior Vice President Lisa Lange.”PETA is calling on the network to switch entirely to affordable, accessible, humane, and versatile technology—and stop using animals who are caged, whipped, and denied everything that’s natural and important to them.”

Last season, despite PETA’s efforts, Zoo used big cats, a bear, wolves, and two baboons, among many other animals. It also employed Steve Martin’s Working Wildlife. Martin is one of the only trainers who still uses chimpanzees, and his violations of the Animal Welfare Act would probably stack up taller than most of the animals’ enclosures—including violations for locking apes in barren cages for up to 18 hours a day.

CBS dropped plans to use infamous trainer Michael Hackenberger only after PETA sent producers a video showing him mercilessly whipping a tiger. He has since been charged with five counts of cruelty to animals.

Animals don’t want to be taken out of their homes in nature and shoved onto sound stages. And with stunning CGI, there’s absolutely no reason to do this.