How does Mad Men star Jessica Paré (aka “Megan Draper”) keep her svelte figure? A vegetarian diet. Jessica told People magazine, “It’s amazing what your diet can do for your skin.” And Vincent Kartheiser isn’t really a bad boy—he just plays one on TV. In real life, Vincent eats cruelty-free, too.

Los Angeles chef Roy Choi gained fame for his Kogi BBQ food truck, but he has turned his back on meat, earning him props from animal advocates and a slew of goodies from PETA.

And Scarlett Johansson credits vegan foods with helping her get ready for that Avengers bodysuit.

When vegan powerhouses collide: Catch the conversation that everyone’s favorite vegan former POTUS, Bill Clinton, had with Ellen DeGeneres and prepare to swell with vegan pride.

Disturbed at how Ukraine is cruelly killing stray animals before the Euro 2012 football championship, the always gorgeous vegetarian beauty Pamela Anderson wrote to the president of the Union of European Football Associations imploring him to support spaying and neutering as a way to control animal overpopulation. Then, while she was in Mumbai, Pam was so stricken by the plight of the many homeless dogs roaming India’s streets that she adopted one to join her family of rescued dogs.

Never one to miss an opportunity to speak up for animals, Pam joined other celebrities in tweeting for them this week: 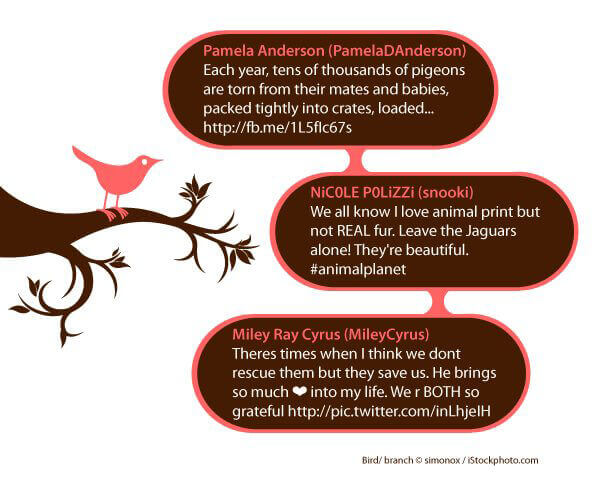 Diane Keaton found an opportunity to promote animal adoption during an appearance on The Tonight Show. The witty star of the new film Darling Companion and longtime vegetarian introduced the audience to Clover, a dog up for adoption, and said, “Clover looks like Jay … except without the chin.”

The crooning voice of Enrique Iglesias was music to one dog’s ears. The sultry singer expanded his dog family to three, with a rescued German shepherd.

To keep up with what all your favorite celebs are doing for animals, follow @PETA on Twitter.