Did you know that in Ukraine, a dog or cat found wandering the streets can be shot on sight or poisoned and left to suffer? Their bodies are tossed into a cremation truck and burned, and some are reportedly burned while alive. It is estimated that in the city of Kiev alone, 20,000 dogs have already been killed in these cruel ways.

Ukrainian authorities are trying to “cleanse” the country of homeless animals before it hosts the European Football Championship in 2012. At a preliminary match between Germany and Ukraine in Kiev last weekend, members of PETA Germany and the Kiev Society for the Protection of Animals protested, calling on Ukrainian authorities to stop the cruel killings and asking the Union of European Football Associations to get involved. 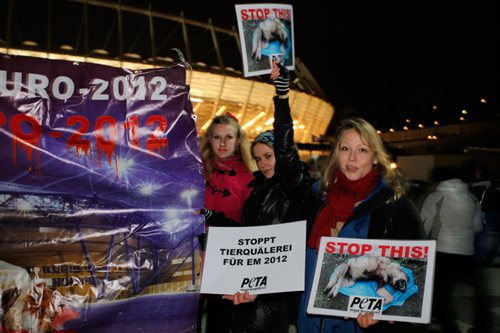 Many German soccer (known as “football” in other parts of the world) players have now joined PETA Germany in publicly criticizing Ukrainian authorities for the torture of these dogs and demanding that the city use humane methods to manage the homeless animal crisis. The only solution to animal overpopulation is a spay-and-neuter initiative, but in the meantime, the city’s unwanted animals at least deserve a peaceful, painless end to their lives.

Please contact the Ukrainian Embassy and politely urge officials to stop these cruel killings immediately. Click here for the e-mail address for your state, or if your state is not listed, you can call 202-333-0606.