No one should ride an elephant—PETA has documented extensively how handlers beat these animals into allowing themselves to be ridden. But for those still in the dark, a set of graphic viral photos revealing wounds from apparent bullhook beatings will make the cruelty of this industry clear.

You can stop inhumanity tortured on elephants by stop riding an elephant! pic.twitter.com/oYtPd0wXzI

In the photos, which were reportedly taken on the island of Phuket, Thailand, it appears that the elephants have sustained bloody punctures and stab wounds from a bullhook. One’s skin looks shredded from multiple injuries, while bloodied elephants are shown being ridden by handlers holding bullhooks in other photos. 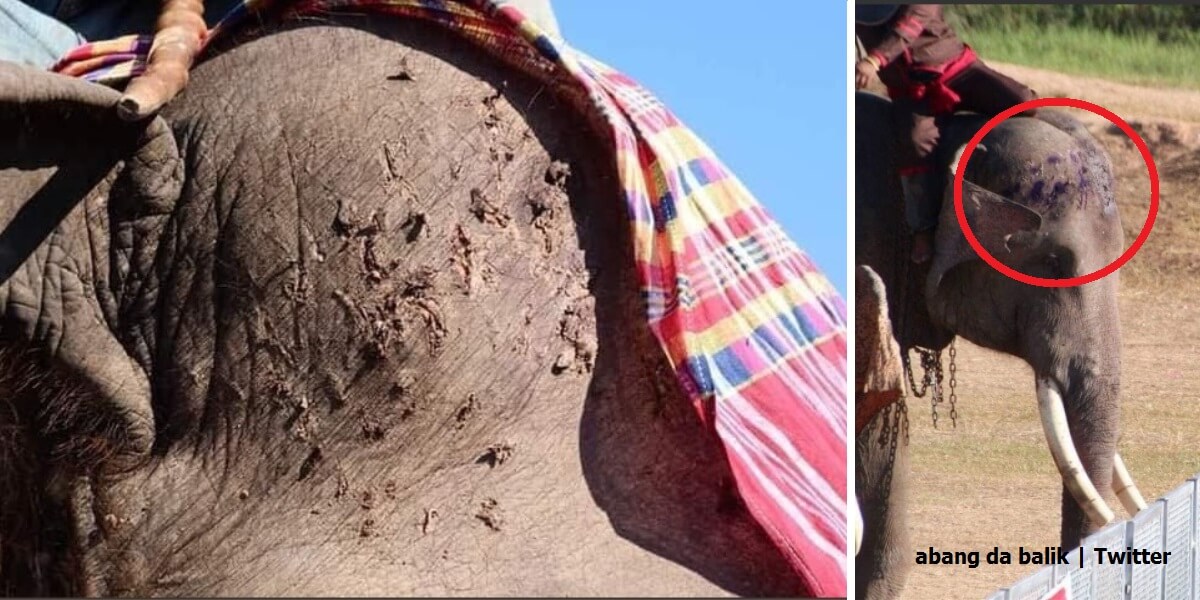 The images were first shared by Twitter user abang da balik (@faizalghazaly) last April and have since racked up over 19,000 retweets and nearly 7,500 reactions.

A representative from the Tourism Authority of Thailand told Yahoo News Australia that Thai travel authorities do not support the riding of elephants and urged tourists to stop supporting businesses that offer the rides.

Trainers beat elephants into submission so that they’ll give humans rides.

Whether or not their scars are as visible as the ones in these viral images, elephants used in the tourism industry for rides and other direct-contact experiences are beaten, stabbed, and even shocked until they learn to fear their human handlers.

Baby elephants are often abducted from their homes in nature. Sometimes, catchers even kill the grieving mothers when they try to rescue their young. Handlers train the babies by tying them down and beating the terrified animals with bullhooks and other instruments until their spirits are broken and they learn the painful consequences of disobeying orders.

These cruel training sessions—during which elephants are commonly deprived of even their most basic necessities, including food and water—can last for days and leaves animals injured and traumatized.

🚨 FACT: Elephants go through HELL just so tourists can ride them 🚨 pic.twitter.com/DFepJMpvSY

Those who survive spend the rest of their lives in forced servitude, lugging tourists on their backs—even in sweltering heat, when they’re exhausted, and often while they’re draped in chains—all while being jabbed and pulled with weapons such as bullhooks.

These sensitive, intelligent animals are condemned to a life of abuse so that travelers can have a few fleeting moments of entertainment. Most captive elephants die decades short of the life expectancy of their species—Sambo, an elephant who was forced to ferry tourists in Cambodia, dropped dead after suffering a heart attack.

PETA has helped persuade more than 50 travel companies to exclude elephant rides from their itineraries. But a handful of businesses such as Priceline continue to endorse the beating, prodding, and torture of elephants by allowing customers to book excursions at exploitative facilities. Stand with PETA today and help us end elephant rides and other forced interactions with tourists around the world.

Urge Priceline and Other Companies to Stop Supporting Elephant Exploitation