As I may have mentioned before, POM Wonderful has apparently decided that the juice industry is just too damn wholesome. The images of healthy kids and smiling parents guzzling delicious, vitamin-filled beverages are fine and all, but there’s just not enough blood for POM’s tastes. The company’s ingenious solution has been to start doing all sorts of animal tests. Not, like, taste tests, but proper suffocating-mice and slicing-up-live-rabbits kind of tests.

We have found this to be somewhat upsetting. Yesterday, we launched our campaign against POM’s animal experiments outside their headquarters in Los Angeles. The pictures and video tell most of the story, but a lovely little side note was when POM’s security tried to block the protesters from public view by parking a big truck in front of the demonstration. Except they parked in a red zone, the LAPD got involved, tickets were issued, and everybody except POM thought the whole thing was kind of wonderful. Anyway, moral of the story: Test juice on animals and face the combined wrath of PETA, the LAPD, and a giant rabbit on your doorstep. Nobody wants that. 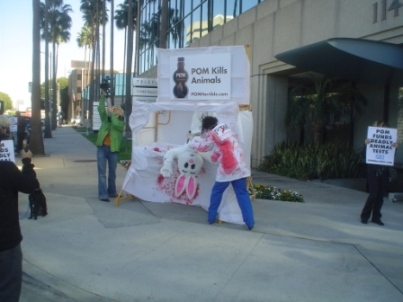