After witnessing an ear-splitting dance party at the Georgia Aquarium to kick off Atlanta Pride festivities, PETA Senior Vice President Dan Mathews sent a letter to the aquarium’s president and COO David Kimmel to set the record straight about how this kind of audio torture of animals is not only inappropriate but also likely a violation of Georgia’s cruelty-to-animals law:

Despite actual knowledge that music and other noises at this volume are profoundly distressing to, at the very least, the belugas and the animals they attack when this stress and frustration manifests itself as aggression … the aquarium continues to willfully subject the animals in its care to excessive noise during planned events.

Dan described his experience at the prison aquarium in detail in a Huffington Post blog post, noting that belugas have a sophisticated sonar system that helps them navigate the arctic waters in which they swim thousands of miles every year in large, social groups. In captivity, the sonar bounces off tank walls, frustrating the animals. Dan spoke (or rather, shouted) with a tour guide who acknowledged that during high-volume events, the male belugas start to attack the harbor seals with whom they share a tank. 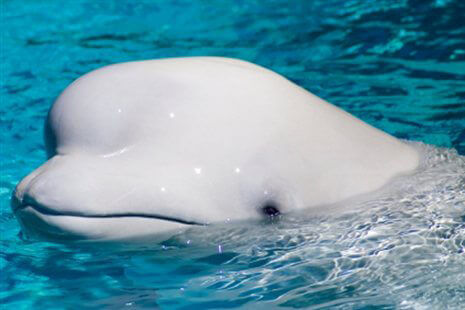 When PETA friend and gay rights supporter Martina Navratilova heard that Atlanta Pride held an event at the aquarium, she told Dan, “I cringe at any zoo or a theme park/aquarium with captive animals. But the big ones, whales, dolphins, giraffes, elephants, etc., the big cats—they make me cry.”

You can help the animals affected by this event by contacting the Georgia Aquarium to ask that it implement a policy immediately that would allow only soft ambient or classical music at events. After all, it’s not as though the animals don’t have enough stress already by being held captive in a tank that—to them—is the size of a bathtub.