A family in Brooklyn called PETA for help after they found an extremely ill swan who was too weak to stand and was stranded on a beach. We guided the family in how to safely contain the swan, and they transported the sick bird to a nearby animal shelter, where professional staff recommended euthanasia because of the swan’s poor condition. The family had hoped that the bird could be saved, but they agreed that euthanasia was the most compassionate option, and the bird was quickly released from her suffering. 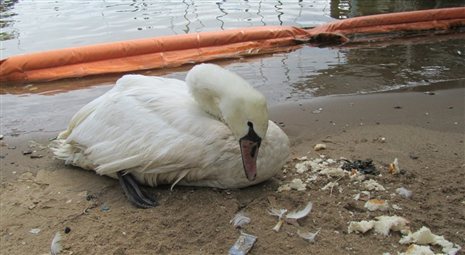 There’s no telling how much longer this swan would have lingered in misery if this kind family hadn’t stopped to help her. Animals count on us always to be on the lookout for them and to step in and help them when they need it. Keeping a wildlife emergency kit in your vehicle (with a carrier, a towel, a net, and gloves as well as phone numbers and directions to animal control bureaus and shelters, 24-hour emergency veterinarians, and wildlife rehabilitators) will help ensure that you’re ready to assist an animal in distress. Whatever you do, never pass by an animal in need—you may be the animal’s only hope.