Here’s a prime example of why feeding wildlife is cruel, not kind. People had been feeding a doe who was living in a residential area. This caused the doe to lose her healthy fear of humans, and she likely walked right up to the cruel person who shot her in the face with an arrow. 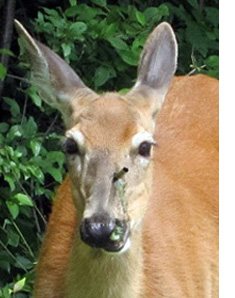 This doe had been living with the broken-off arrow lodged in her badly infected sinus cavity for weeks. After some urging from PETA, authorities were able to tranquilize her, remove the arrow, and treat her infection. Thankfully, the doe is improving, and she now has a fawn.

This story ended happily, but many other encounters between semi-tame wildlife and unkind humans do not. Please, resist the temptation to feed deer and other wildlife so that when they encounter someone who is not as kind as you are, they do the right thing: run away as fast as they can.