Cows aren’t cars, but these cattle look like you could pump gas straight into their sides. A disturbing number of photos and videos online show cows, like these, with holes cut into their sides, fitted with a plastic ring to hold their flesh open.

They’re called fistulated cows, and removing a chunk of these animals’ abdomens to expose their stomachs has been a longtime practice of animal experimenters and is even done at veterinary schools. Although many claim that the surgery doesn’t hurt the cows or reduce their life expectancy, the mutilation still has a four- to six-week recovery period, in which there’s no doubt that the animals are uncomfortable. 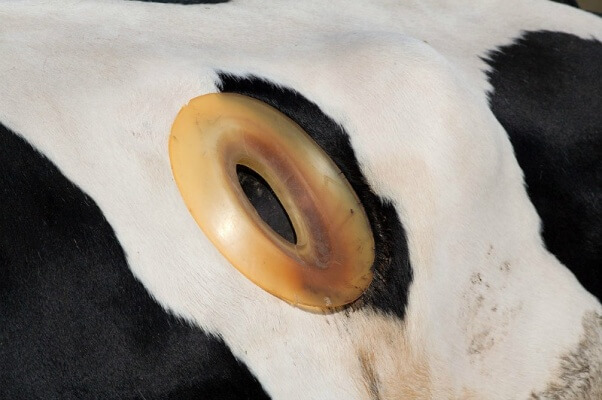 Microbes in fistulated cows’ stomachs are studied and sometimes transferred to other animals. While some claim that this transfer can improve the health of cows, the procedure seems mostly to benefit the meat and dairy industries’ bottom lines—optimizing food and digestion for animals who will ultimately be exploited and slaughtered.

Fistulated cows are also often put on display at events, such as recruitments for veterinary schools, in which patrons are invited to reach inside a live cow. Unfortunately, the federal Animal Welfare Act—the only law that protects animals used in experiments—does not extend to animals used in agricultural experiments, meaning that these cows have no legal protection from cruelty.

Cows are intelligent and sensitive animals who don’t deserve to be mutilated for any reason.

Does the idea of people reaching directly into the stomach of a cow gross you out? Don’t want to contribute to the cruelty of the meat and dairy industries? With so many delicious vegan foods and recipes readily available, there’s never been a better time to go vegan and start saving approximately 100 animals a year.

Pledge to go vegan
Get a FREE Vegan Starter Kit!