Today’s dismissal means that Nosey remains safe from the people who used her aching body for rides and left her—lame and swaying back and forth in her own waste—in a dark trailer. At her new sanctuary home, she finally gets to enjoy the outdoors, take dust baths, relax in a mud wallow, and roam acres of forests and hills—so PETA thanks the Lawrence County officials who stepped in to save her when so many other people had failed her. 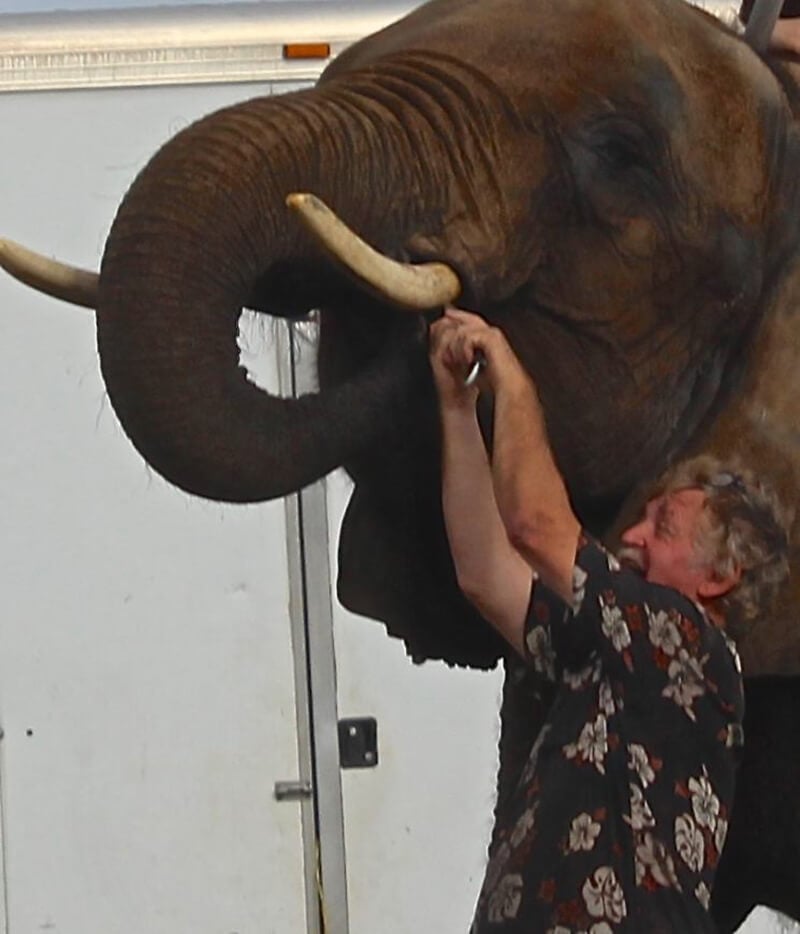 PETA has been campaigning in Nosey’s behalf since 2004. Over the years, we persuaded venues and authorities to bar Liebel’s elephant act, worked with elephant experts, engaged members of Congress, and obtained celebrity support in favor of Nosey’s release to an accredited sanctuary. Last month, Liebel’s federal license was terminated.

During two years of legal proceedings, PETA has supported Lawrence County attorneys every step of the way, showing them where to find evidence to bolster their case and securing elephant experts to fly in at a moment’s notice to evaluate Nosey and testify before she was seized.

PETA made Hugo Liebel infamous for chaining, exploiting, and neglecting Nosey the elephant. Finally, after his horrors were exposed over a period of 15 years, Liebel can no longer exhibit, transport, buy, or sell animals for exhibition. 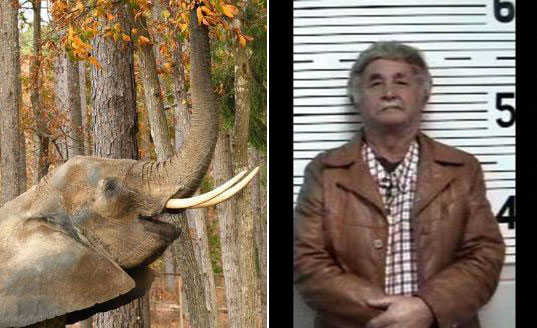 We’ve obtained a copy of a decision and order without hearing by reason of default issued by a U.S. Department of Agriculture (USDA) administrative law judge that terminates Hugo Liebel’s federal Animal Welfare Act (AWA) license. This license enabled him to travel all over the country with Nosey—all while keeping her in a dark, cramped trailer and setting up in parking lots and at fairs to exploit her for rides.

PETA’s campaign to save Nosey and take down Liebel began in 2004, when a whistleblower reported that he routinely abused the elephant with bullhooks and electric prods.

Over the years, PETA persuaded venues to bar performances featuring the suffering elephant, persuaded authorities to bar Liebel’s elephant act, worked with elephant experts, engaged members of Congress, and obtained celebrity support in favor of Nosey’s release to an accredited sanctuary where her needs could be properly met.

The USDA initiated proceedings to terminate Liebel’s license in May 2019, alleging that he’s unfit to handle animals. This termination process began after Lawrence County, Alabama, authorities seized Nosey in 2017. Officers found her inside a cramped trailer, swaying, standing in her own waste, and without adequate water or food. She was also suffering from urinary tract and skin infections, intestinal parasites, painful osteoarthritis, dehydration, and malnutrition. PETA asked the USDA to terminate Liebel’s license based on evidence obtained when she was seized.

Nosey’s story was so shocking that it became the go-to example of elephant mistreatment in the entertainment industry. New Jersey became the first state ever to enact a ban on traveling wild-animal acts—appropriately calling the new legislation “Nosey’s Law.”

In his decision, the USDA administrative law judge concluded that allowing Liebel to hold a license would be “contrary” to the AWA’s “purpose of ensuring humane treatment of animals” because of Liebel’s failure to care for Nosey properly.

Speak Up for Other Animals Forced to Perform

PETA will continue to liberate animals until sensitive, feeling beings like Nosey are no longer neglected or beaten, whipped, or prodded into performing for humans. Everyone who buys a ticket to ride an elephant or attends a performance featuring animals has a hand in this merciless cycle of abuse. But you can make a difference: Click the button below to take down circuses that use animals.

PETA has obtained records revealing that the U.S. Department of Agriculture (USDA) has initiated proceedings to terminate the notorious Hugo Liebel’s federal Animal Welfare Act (AWA) license, following our requests that the agency do so.

Nosey dines on browse donated by the Lewis County Historical Society. As always, we give tremendous thanks to our local community for their support!

Posted by The Elephant Sanctuary in Tennessee on Monday, June 17, 2019

The USDA’s complaint seeks termination on several grounds, including previously uncovered neglect related to Nosey the elephant. Authorities in Lawrence County, Alabama, seized Nosey from Liebel in 2017 after finding her inside his dark, cramped trailer, swaying, standing in her own waste, and without adequate water or food. The USDA requested a default decision on July 9.

PETA is counting the days until authorities terminate Liebel’s license after his years of abusing Nosey.

After law enforcement seized Nosey, they sent her to The Elephant Sanctuary in Tennessee, where veterinarians found that she was malnourished and dehydrated; her scaly, overgrown skin was infected; she had a urinary tract infection and intestinal parasites; she had painful arthritis; and her muscles had atrophied.

Nosey walks through the woods in the habitat one recent afternoon. Caregivers are happy to report that she has been…

Posted by The Elephant Sanctuary in Tennessee on Thursday, May 30, 2019

After less than two years at the sanctuary, Nosey is now thriving. She has expert veterinary care, a vast habitat to roam, and the opportunity to wallow in mud, take dust baths, browse leaves and bark, and more.

Through a Freedom of Information Act request, PETA has just learned that the U.S. Department of Agriculture has informed notorious elephant exhibitor Hugo Liebel of its intent to initiate proceedings to terminate his federal exhibitor’s license, which is the piece of paper that allowed him to cart Nosey, a lame elephant, from town to town in a substandard trailer.

The notification follows requests from PETA noting the numerous ways in which Liebel is unfit to hold a license. He is currently facing cruelty-to-animals charges related to his neglect and mistreatment of Nosey …

… who was seized by Lawrence County, Alabama, authorities in November and placed at The Elephant Sanctuary in Tennessee:

At The Sanctuary, #Nosey has been given the opportunity to explore her new surroundings at her own pace. Over the past several days, Staff have observed her forage leaves and pine branches and discover how to drink from an automatic waterer whenever she likes. pic.twitter.com/PgHGFClcie

There, veterinarians found that she was suffering from arthritis, intestinal parasites, a urinary tract infection, and a multidrug-resistant skin infection—ailments that are all linked to a lack of care during her life on the road.

In January, following a 10-hour hearing, the Lawrence County District Court issued an order that allowed Nosey to remain at the sanctuary with the county animal control officer’s permission. Liebel’s appeal is pending.

BREAKING VICTORY: After decades of being chained, neglected, and forced to give people rides, Nosey the elephant will NOT be going back to her abusers. https://t.co/e58X63E3jf pic.twitter.com/taQAD0WJ9r

After decades of being forced to give rides at county fairs even as she stumbled, this ailing elephant is finally facing a permanent end to such abuse. PETA looks forward to seeing Nosey remain in expert hands at the sanctuary, with a lush habitat to roam, trees to rub against, and a pond to wallow in.

Liebel has given false statements to government agencies, including the Florida Fish and Wildlife Conservation Commission, which denied renewal of his permit to possess Nosey in his home state on those grounds. Florida’s Polk County Code Enforcement has also informed Liebel that he’s not allowed to possess exotic animals at his residence and may not take Nosey back there. We continue to monitor the pending cases against Liebel and his wife, and we’re glad that these abusers are finally facing the consequences of their actions.

Other animals are still suffering in traveling circus acts. But with your help, we can get them off the road. Click below to speak up for all animals who are used as entertainment in circus shows: