We have two hot developments to report in PETA’s campaign to expose and end the abuse of animals in cruel and archaic U.S. military medical training drills: Following complaints filed by PETA about the abuse of goats seen in a shocking undercover video, the U.S. Department of Agriculture (USDA) has cited military trauma training contractor Tier 1 Group for violating the Animal Welfare Act, and the Virginia Beach Zoning Administration (VBZA) has warned the owner of the property where the training allegedly took place that these exercises are not permitted there.

In April, PETA released the video footage taken by a whistleblower during a trauma training session for members of the U.S. Coast Guard. The video showed course instructors with Tier 1 Group repeatedly cutting off the limbs of live goats with tree trimmers, stabbing the animals with scalpels, and cutting into their abdomens to pull out their organs as they twitched, moaned, and kicked. Veterinarians who viewed the video confirmed that these are signs that the goats were not adequately anesthetized and were likely feeling pain.

The video also showed a course instructor from Tier 1 Group who cheerfully whistled as he cut the legs off goats as well as Coast Guard participants who joked about writing a song about mutilating the animals. 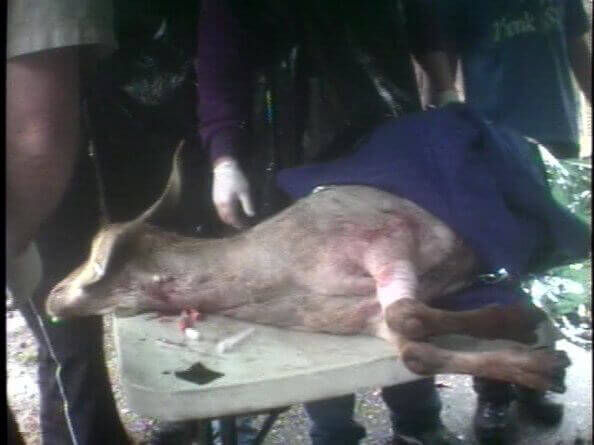 At the time the video was released, PETA filed a number of complaints with authorities, and two of these agencies have now taken disciplinary action against parties responsible for the training. (A U.S. Coast Guard investigation into PETA’s complaint is ongoing.)

The USDA citation for violating the federal Animal Welfare Act was issued because of Tier 1 Group’s failure to give adequate anesthesia to the goats who were stabbed and cut into. This is a repeat violation, as Tier 1 Group was cited by the USDA for a similar violation last year.

The USDA’s citation of Tier 1 Group for failing to anesthetize animals properly during invasive procedures is made even more alarming by the fact that just days after the USDA citation, the U.S. Navy awarded Tier 1 Group a contract worth nearly $2 million to conduct 24 trauma training exercises on live pigs. A company that has violated federal animal welfare law should not be rewarded with millions of tax dollars.

The VBZA letter not only warned that such exercises aren’t permitted but also notified the property owner that legal action may be pursued against him if such unauthorized activities are conducted on the land in the future. These unlawful training exercises have taken place there for years, but officials have now made it clear that they must not occur there ever again.