Rihanna got busted by the fashion police for wearing a dress made of crocodile. Kelly Osbourne rocked for crocs by proclaiming that she’s not down with people wearing crocodile skins.

Over on one of our other favorite shows, Ellen, Carrie Underwood dished about how her hubby, hockey player Mike Fisher, is getting cozy with vegan cuisine. And since Ellen DeGeneres gave Underwood Vegan Cooking for Carnivores by her chef, Roberto Martin, we’re betting things will really be heating up in the couple’s kitchen.

Ellen, Portia de Rossi, and Roberto also veganized the Rachael Ray Show. While Roberto and Portia cooked, Ellen quipped that cheese is so heavy that if you skip it, “there is more room for cocktails!”

In the Philippines for a performance, outspoken vegetarian Morrissey (a few chords from Meat Is Murder, anyone?), urged  President Benigno Aquino III to send Manila Zoo’s lone elephant, Mali, who has spent the last 35 years imprisoned, to a sanctuary that PETA has secured for her in the U.S.

Captivating actor Marion Cotillard is also against holding animals captive. On the orca training scenes that appear in her upcoming film, Rust and Bone, she said, “I’ve always had a repulsion going in a place where animals are in captivity.”

Of course, celebrities were also tweeting for animals this week, including Jonah Hill and Mike “The Situation” Sorrentino: 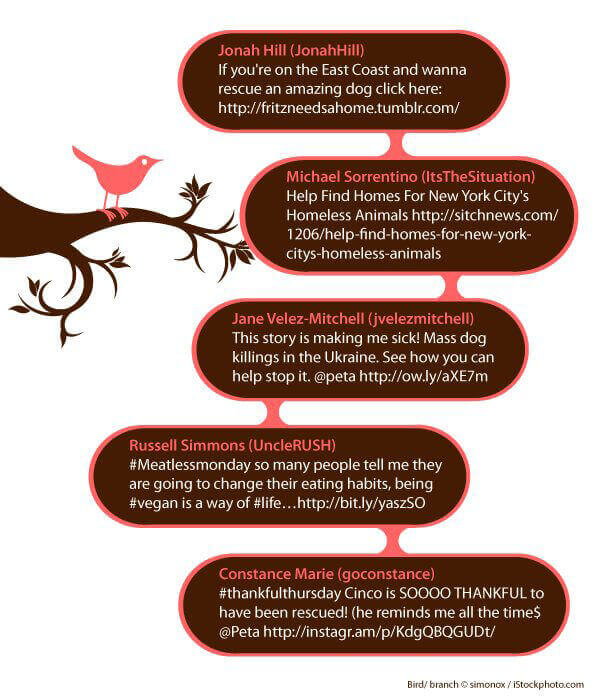