In a letter sent today, PETA is demanding a face-to-face meeting with one of the head honchos at the National Institutes of Health (NIH) because the agency has once again shown that it can’t—or won’t—comply with its own rules on basic, minimum standards of animal care in its laboratories.

PETA has obtained federal case reports, dated from January 4 to May 19, 2022, documenting 17 violations of federal animal welfare guidelines in NIH’s intramural laboratories. These violations are just the latest in a growing mountain of misery that has been piling up for decades in NIH laboratories—where PETA uncovered a staggering 120 violations over the past three years.

From February 2020 to March 2022, we sent NIH brass three letters requesting that the agency get off its backside and do something to correct the systemic rot in its laboratories. Nothing has been done. This time, we’ve requested a meeting with Nina F. Schor, acting deputy director for intramural research.

Despite our multiple objections, NIH officials have refused to take meaningful steps to end the neglect and incompetence that’s right under their noses.

The most recent violations include the following:

PETA has asked numerous times for NIH officials to hold experimenters accountable for the myriad violations in the agency’s own laboratories, where employees could not—or would not—meet even the basic, minimum standards of care for animals. Clearly, nothing has changed.

Feeble assurances of bolstered training, updated operating procedures, enhanced oversight, discussions with staff, and experimenters’ apologies have been insufficient to address the wholesale failure to provide animals in NIH laboratories with even a modicum of protection. 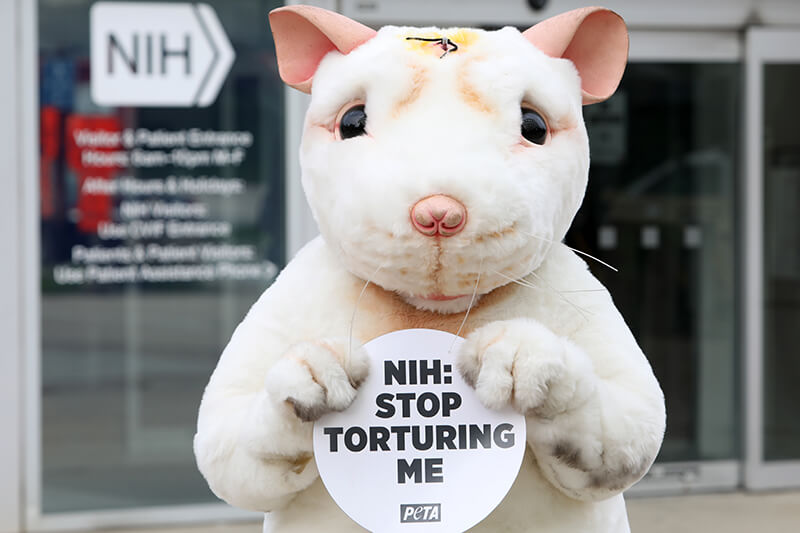 Meaningful actions must be taken in order to end this ongoing abuse and flagrant violation of federal animal welfare guidelines. Rogue experimenters who perform unapproved surgeries or experiments or who fail to comply with veterinary staff directives must be fired. Staff who fail to provide animals with necessities such as food, water, and safe shelter must also be fired. And fundamentally, the agency must pull itself out of the mire of pointless, archaic experiments on animals and implement modern, human-relevant research methods, such as organs-on-chips, organoids, bioinformatics, and 3-D tissue printing.

For an agency that devoured $43 billion in taxpayer funds last year, it simply should not be too much to ask that animals in NIH laboratories be fed regularly, provided with fresh water, and housed safely.

Yet here we are again.