If food costs the Earth, who pays the price? Eating Our Way to Extinction—a powerful documentary narrated and produced by Academy Award–winning actor Kate Winslet—will challenge the way you look at the food industry. Honor Earth Day 2022 (April 22) by streaming this hard-hitting film, which is available today to rent or purchase on all major streaming platforms in the U.S. and Canada as well as on Amazon Prime globally.

To learn more about the impact of the food we eat on the climate crisis, check out the trailer below—and be sure to keep reading.

PETA Reacts to Eating Our Way to Extinction

Eating Our Way to Extinction hits the ground running, presenting viewers with several clear and undeniable facts about the devastating effects of the global animal agriculture industry on the environment.

Throughout the film, the use of powerful imagery and easy-to-digest graphics demonstrates the negative impact that the production of meat, fish, and dairy has on animals, our planet, human health, and indigenous communities living off the land. 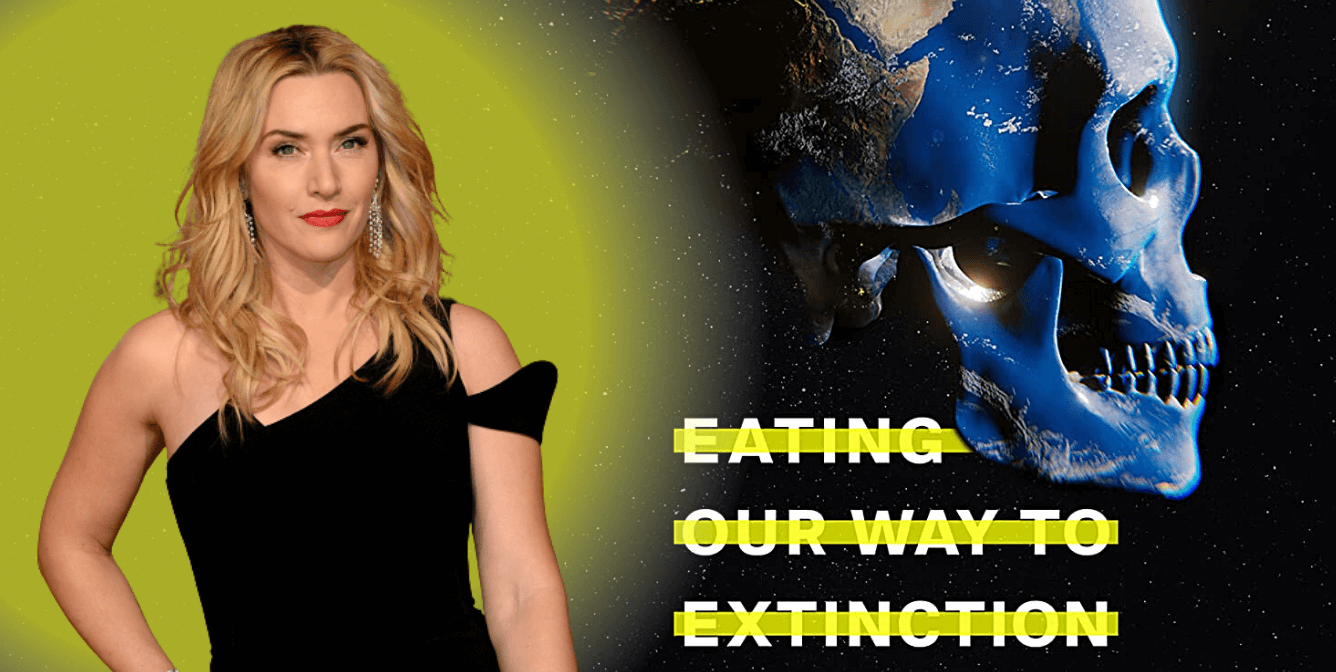 The rampant destruction of tropical rainforests and ocean ecosystems—which are vital to regulating our planet’s atmosphere—is fueling the climate crisis. According to the United Nations , rising temperatures are contributing to the environmental degradation, natural disasters, weather extremes, food and water insecurity, economic disruption, conflict, and terrorism that we’re seeing around the globe.

Are we @EatingOur Way to Extinction? We’re at the premiere of the new film narrated by Academy Award winner Kate Winslet to find out.

This doc will change food forever! Coming this Thursday to theaters for ONE NIGHT ONLY. Available to stream this fall! #Eating2Extinction #eowte pic.twitter.com/Ud3zCxDJt9

Eating Our Way to Extinction pulls back the curtain on corruption, showing how fishing-industry executives wield major political influence yet seem to lack any concern for humans or the planet. The filmmakers also do a deep dive into factory fish farms, where countless animals languish in filthy pools of their own waste.

After hearing what the film had to say about the global fishing industry, one viewer simply said, “I can’t imagine how anyone could ever eat fish again after watching this.”

And viewers also get to see how delicious vegan food is. A side-by-side taste test with the general public proves that, these days, it’s essentially impossible to tell animal flesh apart from plant-based meats.

Takeaways From Eating Our Way to Extinction

Time and time again, Eating Our Way to Extinction presents going vegan as the only choice that humans can make to help reverse the ecological damage already done to our planet by the animal agriculture industry—a message that PETA can happily get behind.

But we can’t wait for public policies or politicians to make the changes needed to prevent the worst effects of climate change. We all have to do our part now, and it starts by thinking more critically about what we should eat and who we shouldn’t.

What Are You Waiting For? Start Eating Your Way to Salvation