Colonel Sanders has finally met his heavily accessorized, bouffant-wearing, monster-sized match: Lady Bunny. The queen of all queens has teamed up with PETA to create an awesome anti-KFC billboard, which just went up in New York City. The larger-than-life female impersonator’s ad advises tourists and commuters that the Colonel’s “secret recipe” is cruelty to animals. 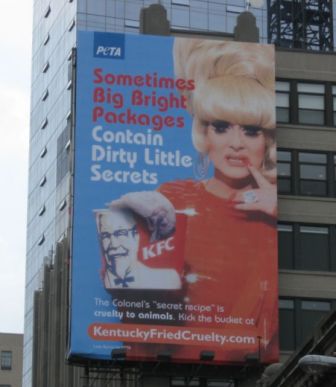 Lady Bunny joins other gorgeous pin-ups, including Pam Anderson and Imogen Bailey, who have protested the well-documented abuse of chickens who end up in KFC’s deceptively pretty buckets of breast meat. However, only Lady Bunny can talk about there being “more than meets the eye” (regarding animal welfare, of course).

I’ve cocktailed at enough gay bars to know firsthand what happens “when queens attack”—and it ain’t pretty. After all, who wants to upset a burly guy who has spent an hour squeezing into a size 3 dress and a pair of high heels?