Internationally renowned primatologist and animal advocate Dr. Jane Goodall has devoted her life to studying animals and giving human beings a deeper understanding of their complex emotional lives. And Goodall is using her scientific expertise to help end marine-mammal captivity. 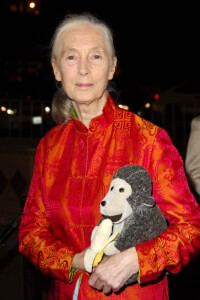 She is urging the Vancouver Aquarium, which breeds animals and loans beluga whales to SeaWorld, to phase out its captive dolphin, porpoise, and whale programs.

“Those of us who have had the fortunate opportunity to study wild animals in their natural settings where family, community structure and communication form a foundation for these animals’ existence, know the implications of captivity on such species,” Goodall wrote in her letter to the Vancouver Park Board. “As society at large and the scientific community now reflect on the keeping of highly cognitive species like primates, elephants, and cetaceans in entertainment and research, I ask the Vancouver Park Board and the Vancouver Aquarium to do the same. The phasing out of such cetacean programs is the natural progression of human-kind’s evolving view of our non-human animal kin.”

And millions more people around the globe are calling for an end to marine-mammal captivity:

Nobody got time for Sea World! #Blackfish