The proliferation of restaurants that serve dog meat in Vietnam has created a lucrative moneymaking opportunity for thieves. “Dognappers” cruise neighborhoods on motorcycles, grabbing dogs in broad daylight and stuffing them into cages. If the owners give chase, it is not uncommon for the thieves to hurl bricks or shoot arrows at them, sometimes injuring or even killing them. Yet many of the same people who despise dog thieves still order dog meat in restaurants. 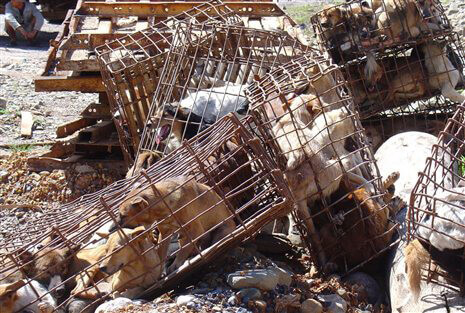 Before we point the finger and call such people hypocrites, think of people in the Western world who have “pet” hens and pot-bellied pigs yet still eat fried chicken and ham sandwiches. They balk at eating animals they “know” but have no problem eating an animal they never met who invariably endured a miserable life on a filthy factory farm and ended up in a very scary place: the slaughterhouse.

To stop the cycle of violence against animals from Vietnam to Virginia and everywhere in between—animals we won’t “get to know”—we must recognize them as individuals we can help by saying “No” to flesh foods.