When PETA got a call from a worried supporter in Alabama about two dogs tied to a tree who she feared had been abandoned by their owner, we immediately called the police. But when police officers inspected the property, they determined that since the dogs weren’t emaciated, they couldn’t seize the animals without speaking to the owner first. 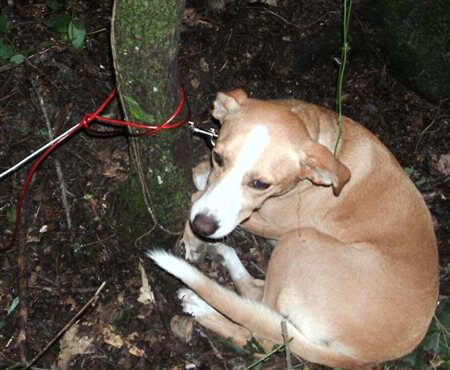 The officers left a notice on the door, but for several days they heard nothing from the absentee owner. PETA vigilantly followed up with the police—each time the officers told us that they had heard nothing, and each time we implored them to confiscate the dogs. Meanwhile, our caller cared for the pups, giving them food and water and untangling their tethers when they became so knotted that they could barely move.

Finally, the dogs’owner contacted the police, admitted that he was never home to care for the dogs, and agreed to surrender them. At last, the police collected both dogs and took them to the local animal shelter. It wasn’t long before the two friendly animals were adopted by people who did want to care for them.

These chained, neglected dogs were fortunate that they had an attentive neighbor who made sure that help came before it was too late. Please, if you suspect that an animal is being neglected or abused, don’t just hope that someone else will intervene or that the guardian will do the right thing—make sure that the animal gets help by making the call yourself.