The Iditarod dog-sledding race, in which more than 150 dogs have died, forces dogs to cross nearly 1,000 grueling miles of ice in biting wind, causing them to suffer from bleeding ulcers, frostbite, heart attacks, and pneumonia, and some even die from inhaling their own vomit. That’s why PETA is calling on Formula One (F1), which is owned by Iditarod sponsor Liberty Media, to cut ties with this death race at protests this weekend at Circuit of the Americas in Austin, Texas. 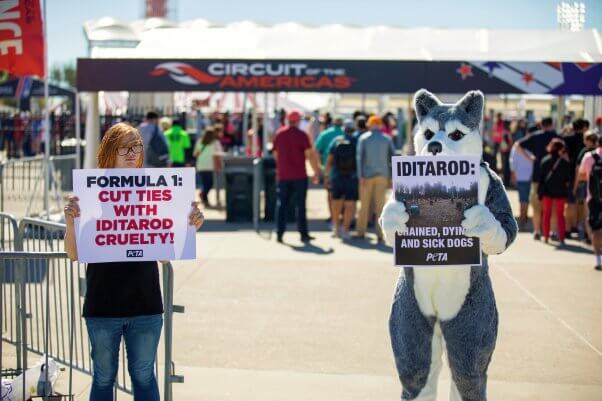 At today’s protest, police detained three of PETA’s protesters, including one in a husky dog costume, and removed them from the property in a golf cart. 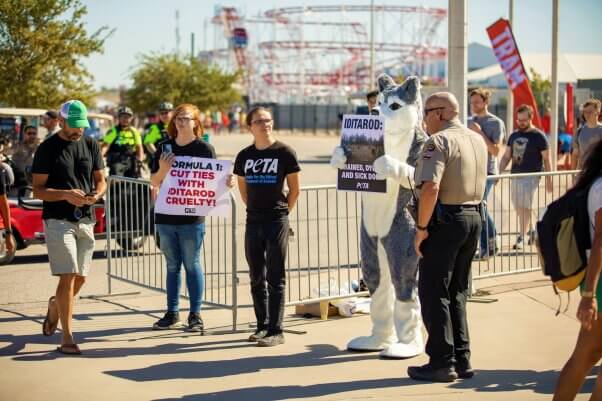 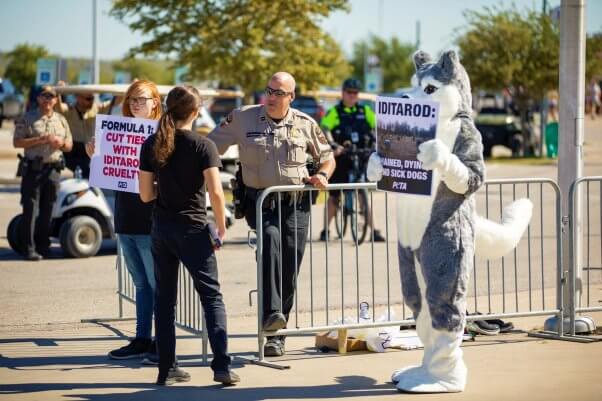 The protesters were issued a trespass warning and are prohibited from returning to Circuit of the Americas, but the rest of this weekend’s protests will go full steam ahead on the public property in front of the racetrack’s entrance.

Where: 9201 Circuit of the Americas Blvd., Austin

At the protests, a PETA “husky” mascot, representing the 150 dogs who have died in the Iditarod, is leading other animal defenders as they gather outside the F1 Grand Prix with signs reading, “Formula 1: Cut Ties With Iditarod Cruelty!”

PETA has already persuaded Millennium Hotels and Resorts, Coca-Cola, ExxonMobil, Alaska Airlines, and Wells Fargo to pull their sponsorships. And now we want Liberty Media to put the brakes on permanently for its support of the notorious race and the abuse and suffering of dogs both during and after the event, which are reflected in this damning video footage.

Liberty Media still has ties to the deadly event because GCI, which it owns, continues to sponsor the race to the tune of more than $250,000 every year. Why would F1 want to be associated with cruelty to dogs? We bet most drivers—particularly those with dogs, like Lewis Hamilton—would say that it should get out now!