In time for their 94th anniversary (November 18), parodies of iconic Disney characters Mickey and Minnie Mouse have appeared in a new campaign by PETA to highlight the cruelty that small animals endure in the forced swim experiment. 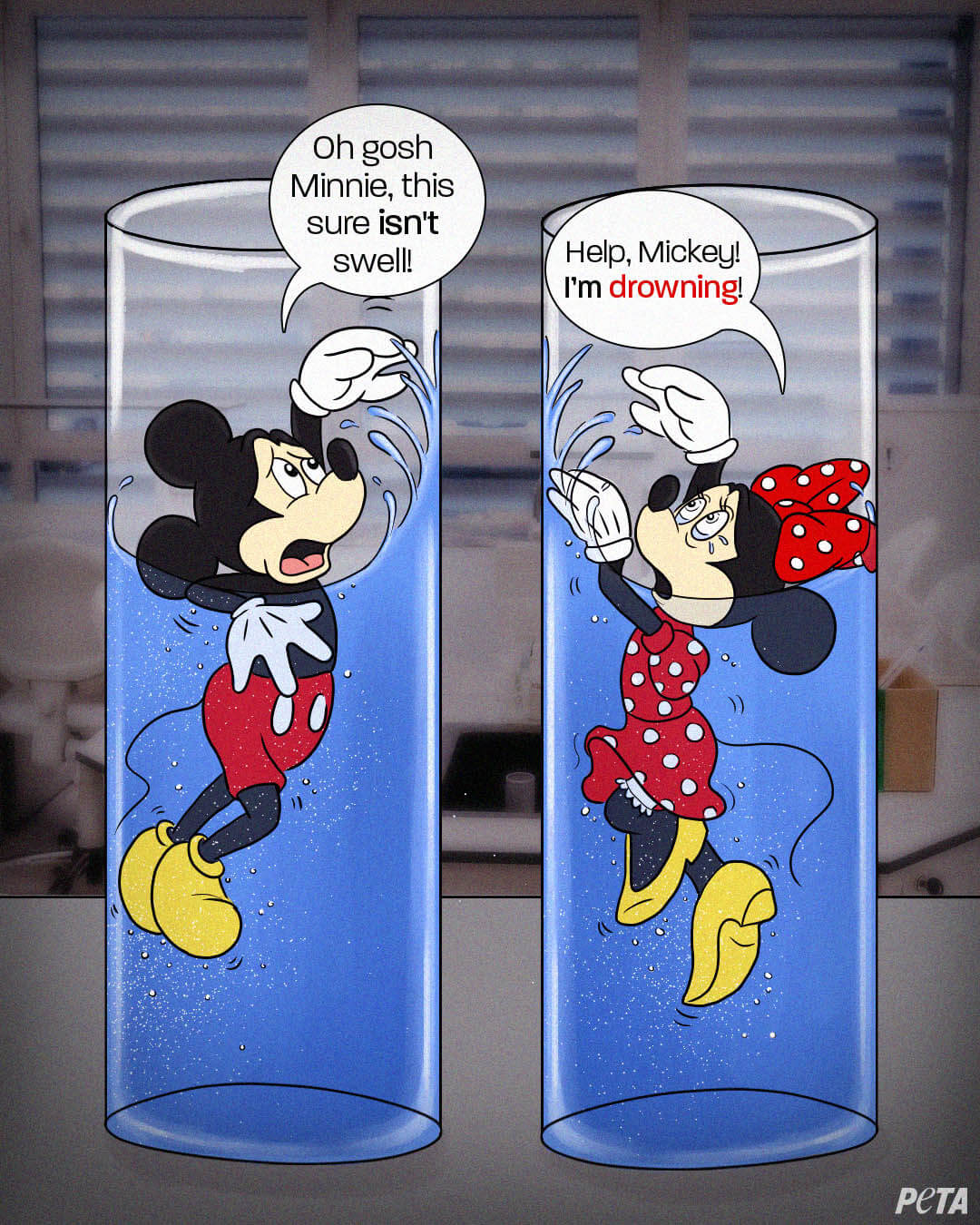 What Is the Forced Swim Test?

Hernandez’s illustration portrays real life, not fantasy. In the widely debunked forced swim test, experimenters induce panic in vulnerable small animals such as mice and rats, who may be dosed with a test substance before being dropped into inescapable cylinders of water and made to swim. Terrified that they’ll drown, they attempt to climb the steep sides of the container and even dive underwater to look for an escape.

This is done under the erroneous assumption that it can reveal something about mental health conditions in humans. After the test, experimenters kill the animals—by gassing, blunt trauma to the head, an overdose of anaesthetic, or breaking their necks—to study their brains.

Anyone disturbed at the thought of beloved Disney animals suffering in near-drowning tests should spare a thought for the intelligent, sensitive mice and rats who suffer in these cruel experiments in real life. PETA is calling on institutions around the world to drop the forced swim test and adopt modern research methods that leave animals in peace and have a far better chance of helping humans.       —PETA neuroscientist Dr. Emily Trunnell

The forced swim test has been strongly criticized by the scientific community.

Forcing animals to swim for their lives inside glass containers is a poor model for human mental health issues. What’s more, the misleading test could prevent the discovery of effective new drugs for humans.

The test is so worthless that it’s actually less predictive than a coin toss. This is what Dr. Trunnell found after analyzing the use of the test by major pharmaceutical companies. Her study was published in Drug Discovery Today.

How You Can Help Ban This Bad Science

Following discussions with PETA entities, 15 companies, including Bayer and Johnson & Johnson, and several universities (some of which previously performed the test for depression research), have declared that they don’t intend to use the forced swim test in the future.

Take action for mice and rats by telling Eli Lilly to ban the forced swim test: