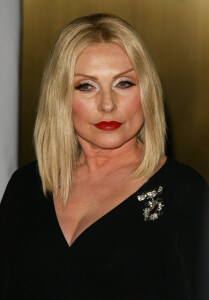 Update: Just days after rock icon Debbie Harry spoke out for the abused horse named Blondie, news broke that the horse’s driver, who has a history of violations, had his license yanked by city officials. NYC carriage driver Saverio Colarusso was charged with cruelty to animals after a police officer observed him forcing Blondie to work despite a visible leg injury that made it painful for her even to stand. Colarusso admitted to the officer that Blondie had been hurt for four days, but he still forced her to haul passengers.

In 2010, Colarusso was charged with drinking while on duty, and he has also been fined for driving his horse through city streets at unauthorized times. As Harry told New York City Council members, “Blondie’s case and its many implications show why I and so many other people support Mayor Bill de Blasio’s efforts to get these overworked horses off the streets and retire them to sanctuaries.”

“I’m writing to you about Blondie—not my band, but the horse at the center of a carriage driver cruelty case.” So wrote Blondie lead singer and New York icon Debbie Harry to the New York City Council. She urged the council members to heed Mayor Bill de Blasio’s plan to pull the horses from Manhattan’s chaotic streets.

Blondie (the horse) was forced to work for four days by a carriage driver despite suffering from a painful and potentially lethal hoof disease. Her driver was charged with cruelty after a police officer noticed the horse limping. The driver’s court date is scheduled for next month.

In her letter, Harry points out that Blondie came from Clinton Park Stables—the same stable that Liam Neeson visited and showed off to council members with a blanket assurance that the trade is humane.

“The carriage trade has shown repeatedly that it won’t abide by the few regulations that are intended to protect these animals and the public,” Harry wrote. “Blondie’s case and its many implications show why I and so many other people support Mayor Bill de Blasio’s efforts to get these overworked horses off the streets and retire them to sanctuaries.”

Harry joins numerous other New Yorkers and celebrities, including Lea Michele, Peter Dinklage, P!nk, and Jillian Michaels, in calling on the industry to stop forcing horses to drag people around, to paraphrase Blondie’s latest single.