Two kayakers who were reportedly fishing near Refugio State Beach near Santa Barbara, California, got more fish than they bargained for when one paddler was actually lifted out of the water by what they suspect was a great white shark. Authorities reopened nearby waters to swimmers after a brief closure, but to warn local beachgoers that potential killers are still lurking along the coast, PETA had this banner flown over the area: 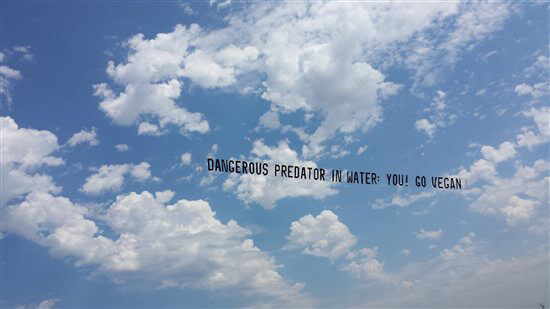 While there are a handful of well-publicized shark attacks around the world each year, humans kill an estimated 100 million sharks every year. Just last month, a record-breaking 1,300-plus–pound shortfin mako shark was killed by a group of men filming a show for the Outdoor Channel.

Countless sharks—as well as sea turtles, birds, seals, whales, and other “nontarget” animals—are also caught each year alongside hundreds of billions of fish in ocean-ravaging nets or dragged for hours on long lines for the commercial fishing industry, from which no sea dweller is safe.

Stop Being a Predator

For all animals, the most dangerous predators of all can be found lined up at a restaurant’s all-you-can-eat buffet. Cut the line on cruelty—PETA’s here to help make going vegan as easy and fun as a day at the beach!