For eight years, Dave (not his real name) worked at Reitz Dairy Farm in Shamokin, Pennsylvania. During that time, he tried to improve the living conditions for the cows there. And this past October, having seen little progress, he could no longer stand to witness such abuse and confronted the owners before leaving the farm and contacting  PETA.

The public first got a glimpse inside Reitz Dairy Farm from a PETA investigation in 2009. Dave reports that little has changed since then.

He told PETA that manure flowed into a creek behind the barn and over the driveway and that the cows were forced to lie in their own waste. 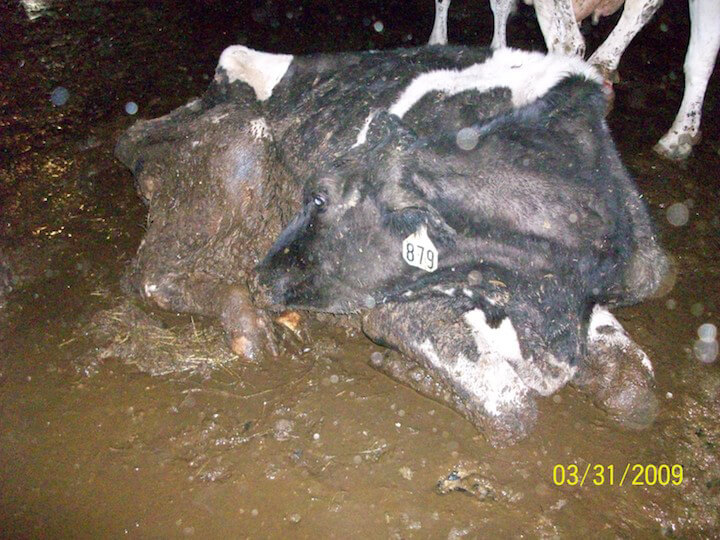 He also said that owner Lloyd Reitz and his son Andy often refused to provide sick or injured cows with needed veterinary treatment or even basic care. The staff wasn’t trained to detect mastitis, a painful inflammation of the udder, and often would only notice it when large chunks of pus appeared in the milk.

There were maggots in the cows’ food, cockroaches in the food and the milking parlor, and rats in many areas. The agitators on two of the three milk tanks leaked gear oil into the milk, Dave said. The owner and his son knew about the leaky seals but didn’t repair them.

Calves were kept in dilapidated sheds, and the owner used one of these sheds to store detergent, which the calves often ingested. He also evidently stored formaldehyde where many of the cows ate, and Dave witnessed them licking the formaldehyde bucket on several occasions. 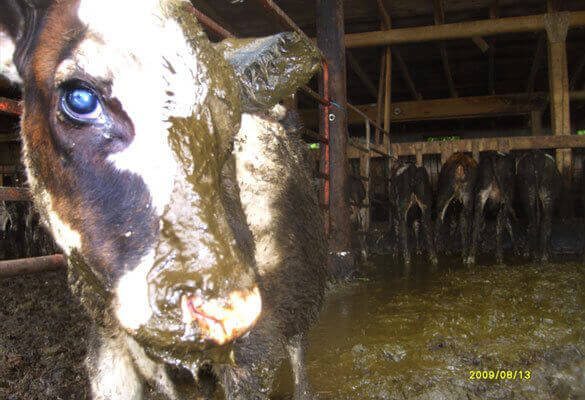 Dave also saw Lloyd Reitz electroshock “downed” cows inside their ears. When a cow was down in the “hospital” pen, the owner and his son would slit her throat without any prior stunning. She would bleed out and die in the filthy pen in full view of the other cows.

When Dave expressed his concerns and asked for changes, the Reitzes laughed at him and told him that this was how things were done. And it is how things are done on dairy farms across the U.S. and around the world, as PETA investigations have shown time and again. While the Reitzes were likely scared into starting to clean up the farm following PETA’s investigation and Land O’Lakes’ decision to drop their company as a supplier, it appears the farm eventually went back to business as usual. PETA has once again alerted local and state authorities.