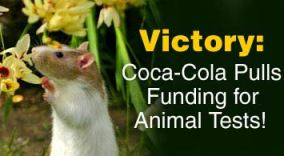 Just weeks after Pepsi announced that it would stop testing on animals, Coca-Cola has sent a letter to PETA announcing that it will no longer fund or conduct animal experiments. Coke had something of a history of invasive animal experimentation—including cutting open chimpanzees’ faces in order to conduct taste tests and force-feeding chemicals to rodents to test “caramel color”—so this compassionate decision by the company is a huge step forward, and it sends a powerful message to all companies that still test on animals about how a responsible, progressive company does business. Here’s what Coca-Cola’s senior vice president, Danny Strickland, said in his letter to us announcing the company’s decision:

“The Coca-Cola Company does not conduct animal tests and does not directly fund animal tests on its beverages. … We are sending letters to our partners and research organizations who may conduct safety evaluations on … ingredients insisting they use alternatives to animal testing ….”

Strickland also talked about a deadly physiology test on taste reception in rats that PETA had discovered Coca-Cola was funding through the year 2008, saying, “Recently senior management became aware that research involving rats was being conducted as part of a grant we had funded at Virginia Commonwealth University to study taste reception. We have contacted the University and have discontinued our funding.” This is a big victory for animals and an encouraging sign that animal experimentation is rapidly on its way to becoming another chapter in the history of severely messed-up stuff we wish we had never thought of in the first place.