So we just heard from Christina Aguilera that she has replaced the fox-fur stole she wears on stage with a faux-fur version after receiving a letter from PETA. Apparently, she had specifically asked her tour’s costume designer, Roberto Cavalli, to only use fake fur, but in a press release to Women’s Wear Daily, Cavalli bragged that he had sent her a stole made from real, dead white foxes.

It may be that Roberto Cavalli was still sulking after PETA members disrupted his Milan fashion show this fall and decided to take it out on some foxes, but we’re very grateful to Christina for doing the right thing from the start: After PETA VP Dan Mathews emailed Aguilera the Cavalli item and a link to Stella McCartney’s video exposé showing how foxes are anally electrocuted for their fur, he got an immediate response saying that Christina is “very upset” because she “only ever wears fake fur.” The fox stole has already been replaced with a faux-fur version, and the tour is continuing in Europe 100 percent fox-free. Thank you, Christina! 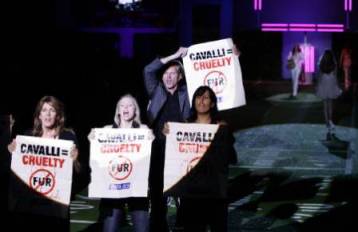