So, after a few months of getting used to their new synthetic ball, the NBA has decided they need to switch back to balls made from cows next year. Because Steve Nash and Shaq didn’t like the way the new balls grazed their delicate hands. This has been tough for us sports fans at PETA, because while we were delighted with the NBA’s decision to use nonleather balls (as the NCAA has for years), we’re also well aware of just how sensitive the hands of some NBA players are—much softer than college players’ hands—and we’d hate for Nash, Shaq, or LeBron to ruin their manicures.

But we have a compromise that will save Shaq’s skin and cowskins at the same time: Today, PETA’s Campaign Manager Dan Shannon sent an open letter to NBA players, offering a lifetime supply of cruelty-free hand cream to anyone who’s willing to give the composite ball another shot. You can read the letter here, and if you have any extra sensitive-skin hand cream lying around, you might want to send it along to some of these guys c/o the NBA. We just hate to see them suffer. 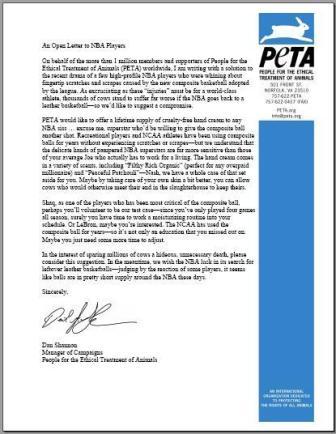