Update: Because it is illegal in Ohio to use a bullhook on an elephant, PETA is offering a $5,000 reward to any arena employee who documents use of the bullhook if it leads to a citation against Ringling Bros. circus. 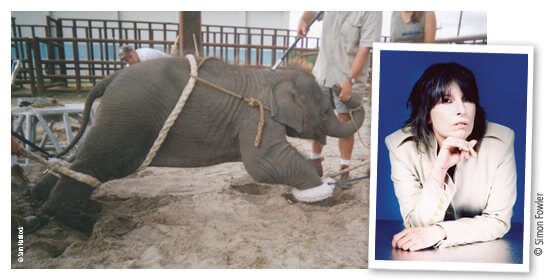 Rock star, animal defender, and Ohio native Chrissie Hynde has sent a letter to Cleveland officials to remind them that there is a ban in the state against using prods like bullhooks and “hot shots” on animals in circuses and asked for confirmation that humane authorities would make sure Ringling Bros. and Barnum & Bailey Circus doesn’t use them on elephants when the circus comes to town next month. In response the letter, the mayor wrote that the city shares Chrissie’s concerns and that “[a]n inspection will be conducted and the event monitored to ensure that the use of bullhooks and other devices that cause harm to circus animals are not used during the Cleveland event.”

We’ll be watching to make sure that the mayor keeps his word, but we won’t be watching the circus, and neither should you.